The Children of Reggio Welcome You


Soon after arriving in Reggio Emilia by train, visitors and residents pass through a sotto passagio, an underground tunnel under the railroad tracks. Not just a safer, more convenient way to get to a taxi or bus or head from the station into the city on foot, it is also a welcome to the city of Reggio by the children. 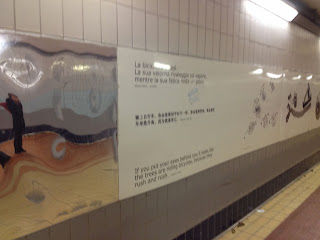 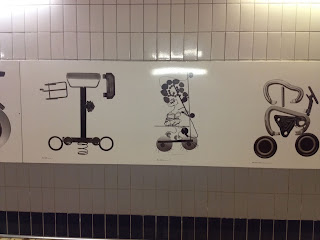 A graphic installation of 24 black and white panels of children’s images of bicycles, the mural runs approximately 240 feet long through the passageway. An occasional mirror is inserted between panels where the tunnel bends and cyclists are not easy to see because this is also a passageway with fast-moving bike traffic.

Hundreds of bicycles were drawn by children from infant toddler centers and preschools through high school, from creative play centers, and from parish centers around the city. The drawings were created with discarded materials and bi-products of industrial processes, images that were scanned and digitized.  Quotes from children in many languages capture and reflect their experiences and understandings about bikes and riding bikes, like the one from 5 year old Rupert, “If you put your eyes behind you it looks like the trees are riding bicycles, because they rush and rush.” 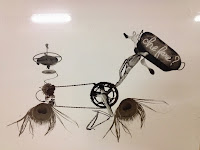 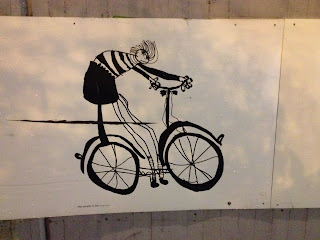 We often see children about the city as I did Wednesday afternoon when children in strollers, buggies, and baby carriers moved through the center of the Piazza with their mothers. Seldom, however, do we see children’s creativity and ideas presented so prominently in a very public space and in such a significant location as we do in this extensive mural. The striking graphic style testifies to children's capacity to imagine, explore, and express ideas in beautiful and complex ways. Its scale also brings visibility to children’s presence and their value to the city. 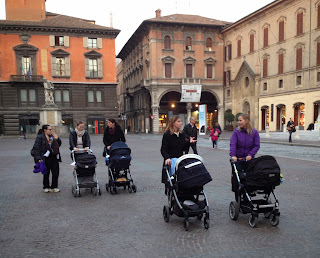 A part of a larger project, Under the City Skin, BIKES LOTS OF THEM, is a project of REMIDA the Creative Recycling Centre.
Posted by Jeanne Vergeront at 5:49 PM