Now Playing ... On the Sidewalk

Debating children’s play is nothing new. For five centuries, scholars have explored the meaning of the children’s games depicted in Pieter Bruegel’s “Children’s Games.” The 1560 painting shows two hundred children playing 80 different games: children roll hoops, ride barrels, play tug of war, spin a top, play with a doll, and blow bubbles. Scholars have questioned whether the children are depicted as ideal or believably childlike; as little adults or as mischievous urchins; are engaged in folly or learning. Expressing both interest and concern, scholars have looked at the painting’s subject in the context of morality and of Antwerp’s progressive schools at the time. Four hundred years later, William Carlos Williams’ poem about the painting imagines a grim humor in Bruegel’s devotedly recording the games.


In the 21st century, interest and concern about children’s play persists. We wonder about and discuss play’s value, explore its relation to learning, and are concerned whether children are playing enough. Parsing what’s optimal for children’s play is a challenge. We try to distinguish, for instance, among the play we hope children engage in, the play we remember with delight from our own childhoods, and the possibility of play we are unaware of. While being concerned about whether children are playing enough or as children “used to play”, I don’t want to miss traces of the play that is occurring.

Whether children play enough or engage in the right kind of play, they are playing and often right before our very eyes. On my walks in my neighborhood and in other cities, I come across signs of children’s play. Who else would have decorated the sidewalk with chalk or built fairy houses? Who but three lucky sisters can draw with chalk on the side of their house? What else could create the screams of delight than Cente and his cousins riding the skateboard down the sidewalk–on their backs?


Children play where they find themselves. Without cars or busses to get very far from home on their own and with snippets of time too short to roam far on bikes, children’s places to play are close to where they live: in front of the house, in the back yard, under the trees in the side yard, and often on the strip of parkway between the sidewalk and street. In found spaces overlooked by adults, children create worlds leaving traces of their play of found objects, plants and seeds, water, light and shadow, small critters, and snow.

Found Spaces
The spaces adults pass by or through with little notice are places children can take control of, even if only temporarily. Low down and out of sight, sometimes overgrown with plants or piled high with snow, children know just what to do in loosely structured, found spaces. They take ownership with their play. In a postage stamp-sized green space, children find inspiration in small objects (a straw dropped by a passerby), a puddle from yesterday’s rain, or plants pushing through unfriendly soil. Using whatever is available, children imbue found spaces with new qualities made possible by their imaginations. 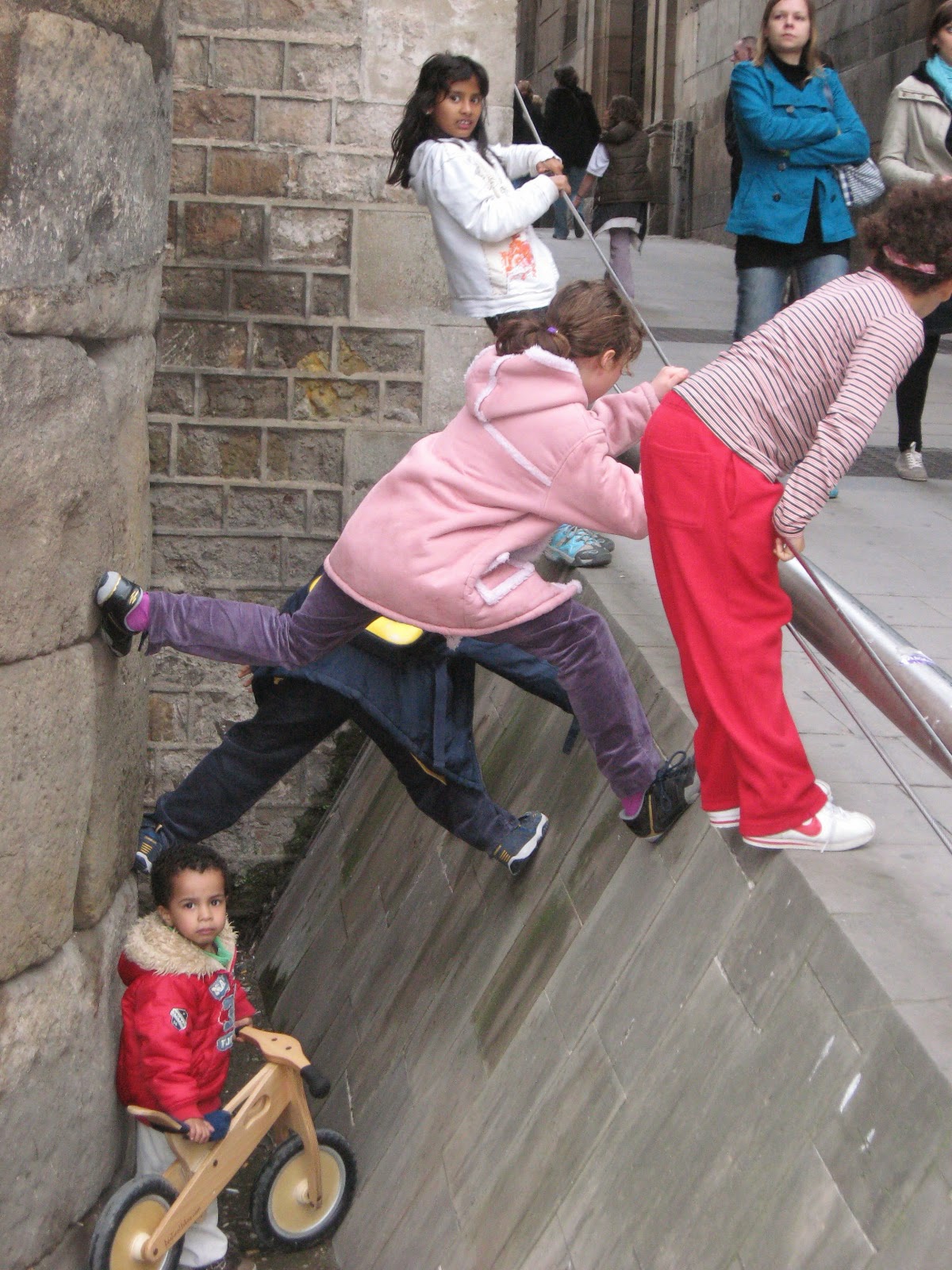 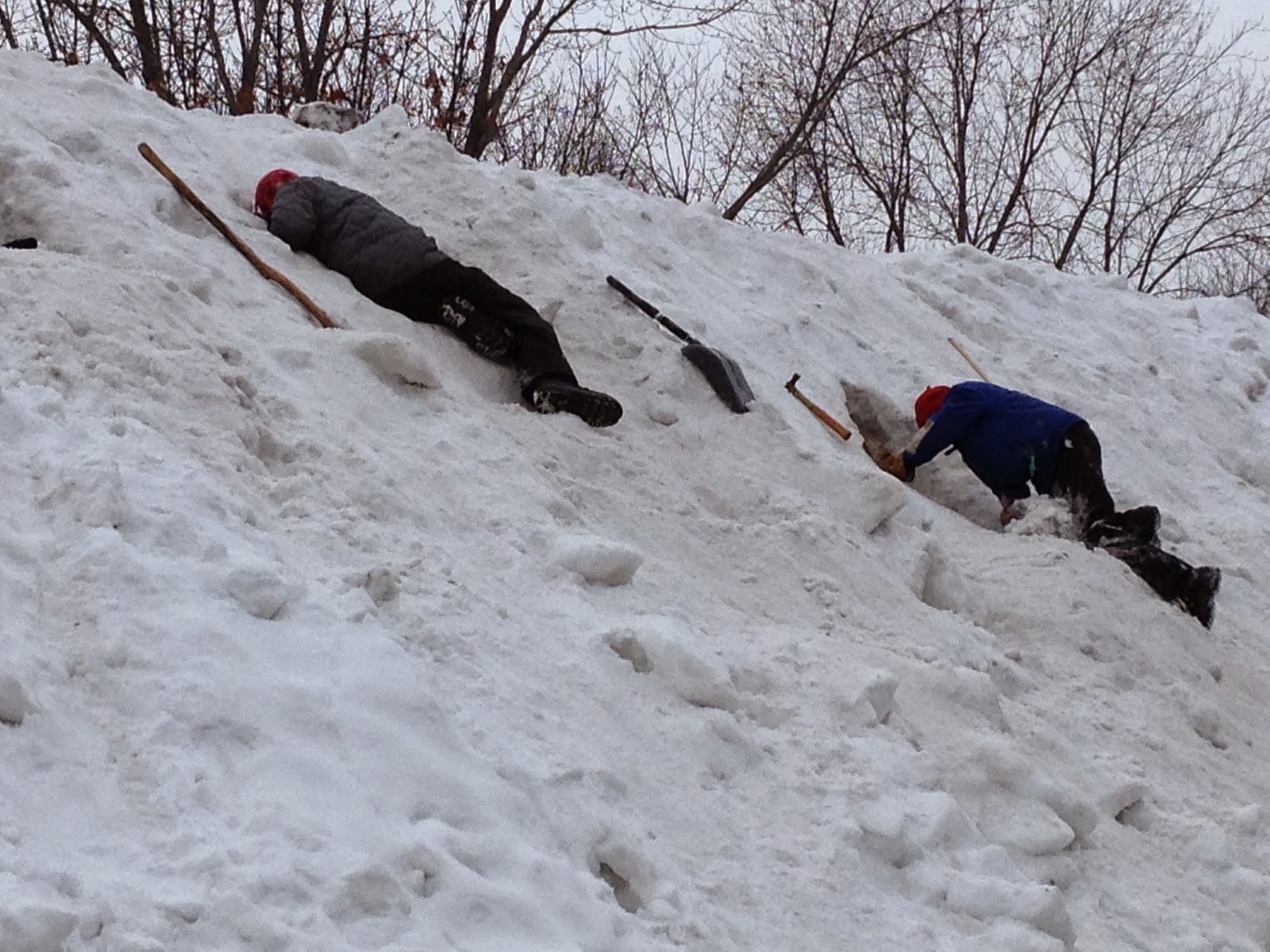 In huge mounds of snow left by the plows, children earnestly dig caves and tunnels while adults pass by on the walking path without a pause. For two friends, this grand snow pile is a glacier or the North Pole and they must rescue members of their expedition. At a corner fountain, three children gather, take off their shoes, dangle their feet in the water, and tell jokes. In the narrow space between an old stonewall and a ramp, four girls hold onto the railing. Creating physical challenges for themselves, they squeeze, stretch, and balance. In the soupy muddy rut next to the sidewalk, three small boys float their boats.

Creating Worlds
Children give shape to small worlds gathering and arranging found objects, transforming a box, or claiming space in the shade between plants. Sometimes, it seems these small worlds evolve over time with a child’s multiple visits to a chosen spot. Plants grow taller and thicker over the summer, a shell from vacation is added, a character moves in, an imagination of the possible expands. These worlds change from both inside and outside. 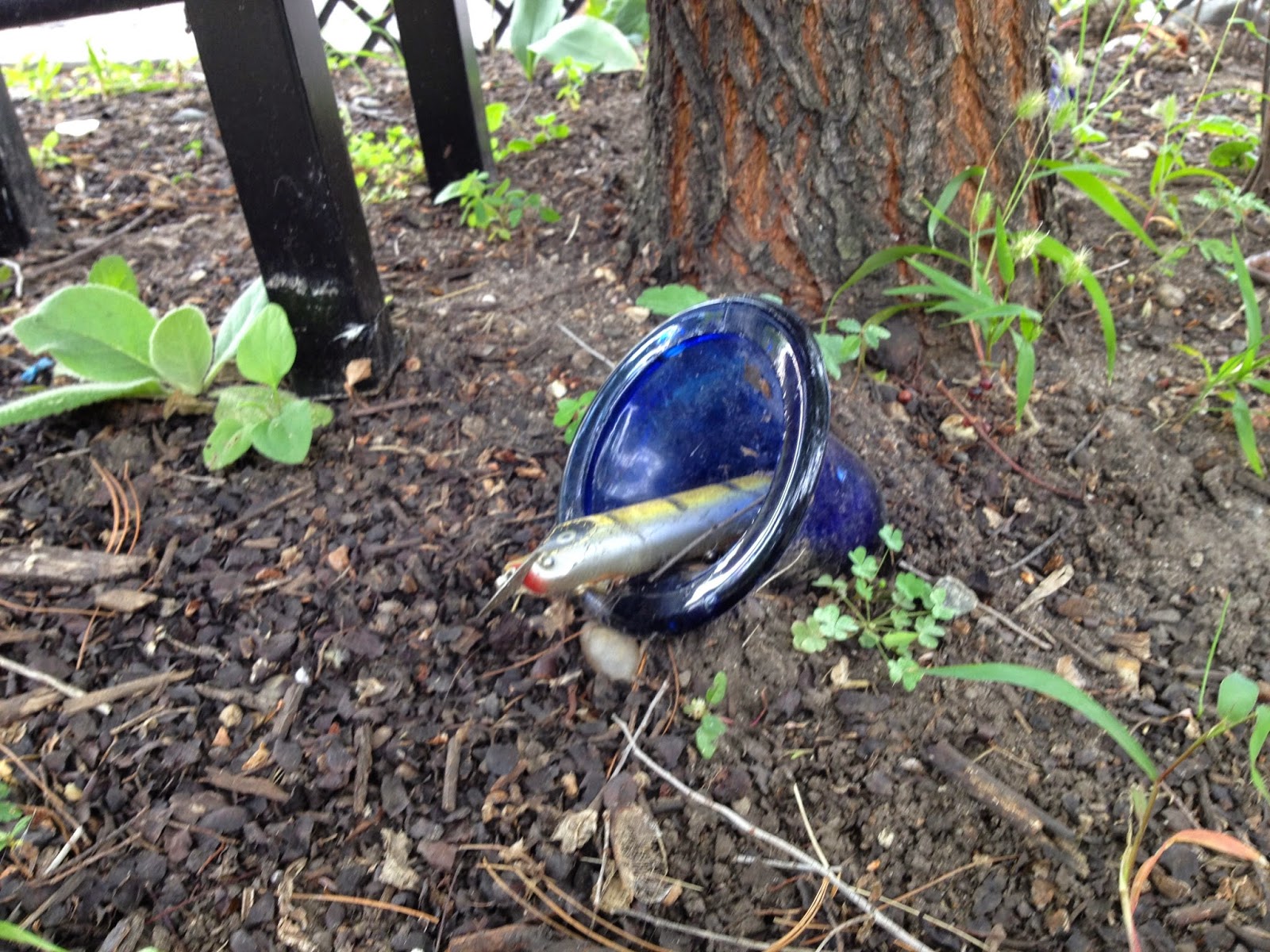 One well-played spot I came across on a walk was a bare weedy patch under a tree between the sidewalk and the street. A partially buried blue bowl first caught my eye; a fishing lure was cradled in it as if the fish were swimming through sky-blue-waters. By crouching down, other small groupings of objects gradually came into view. Two miniature wrought iron chairs sat side-by-side; a figurine of a tiny mouse with a saddle on its back perched on a stone; two small horses lay on their sides near a wooden barn. At one end, a child’s chair seemed to oversee this world–or these several smaller worlds. 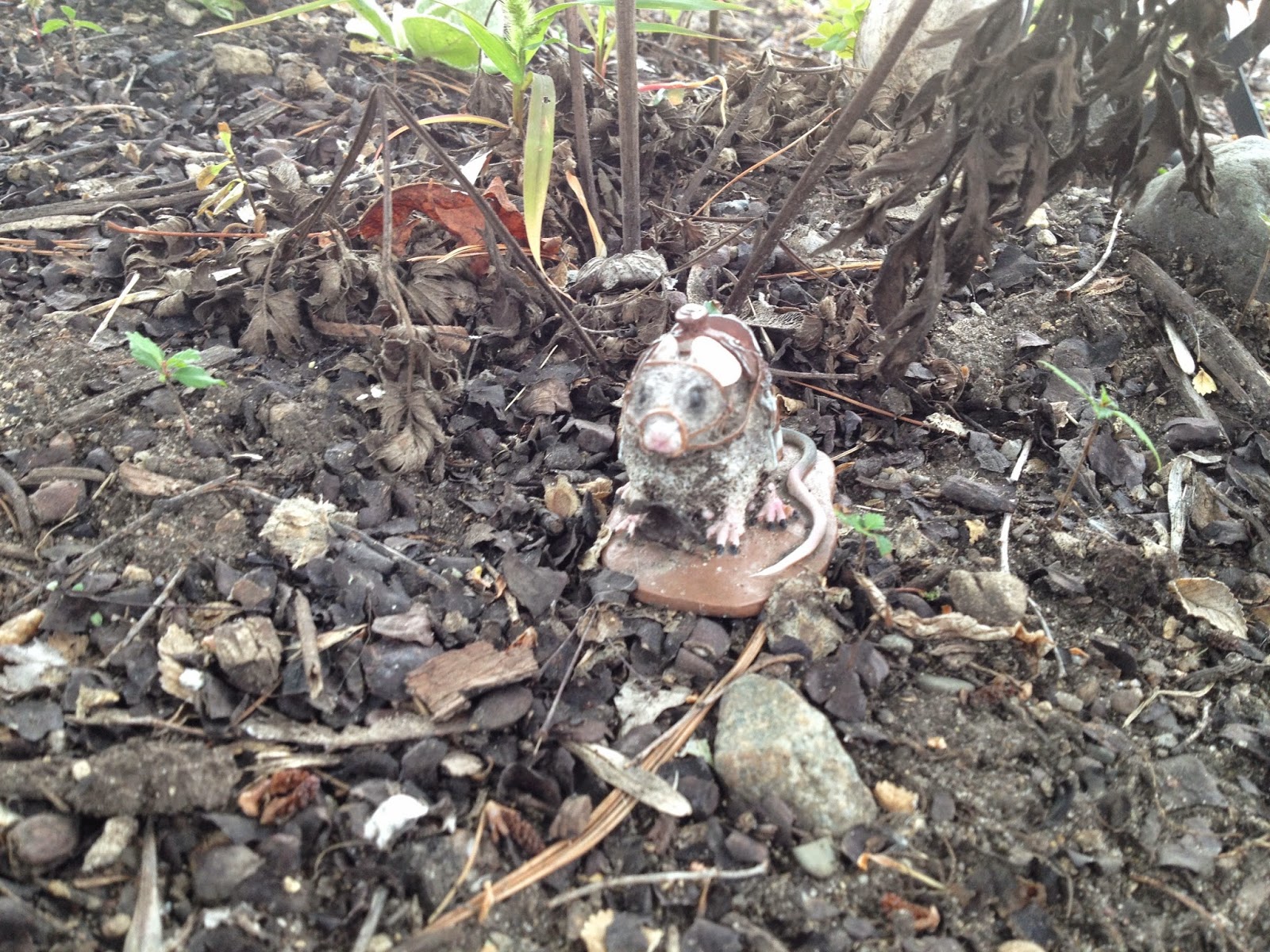 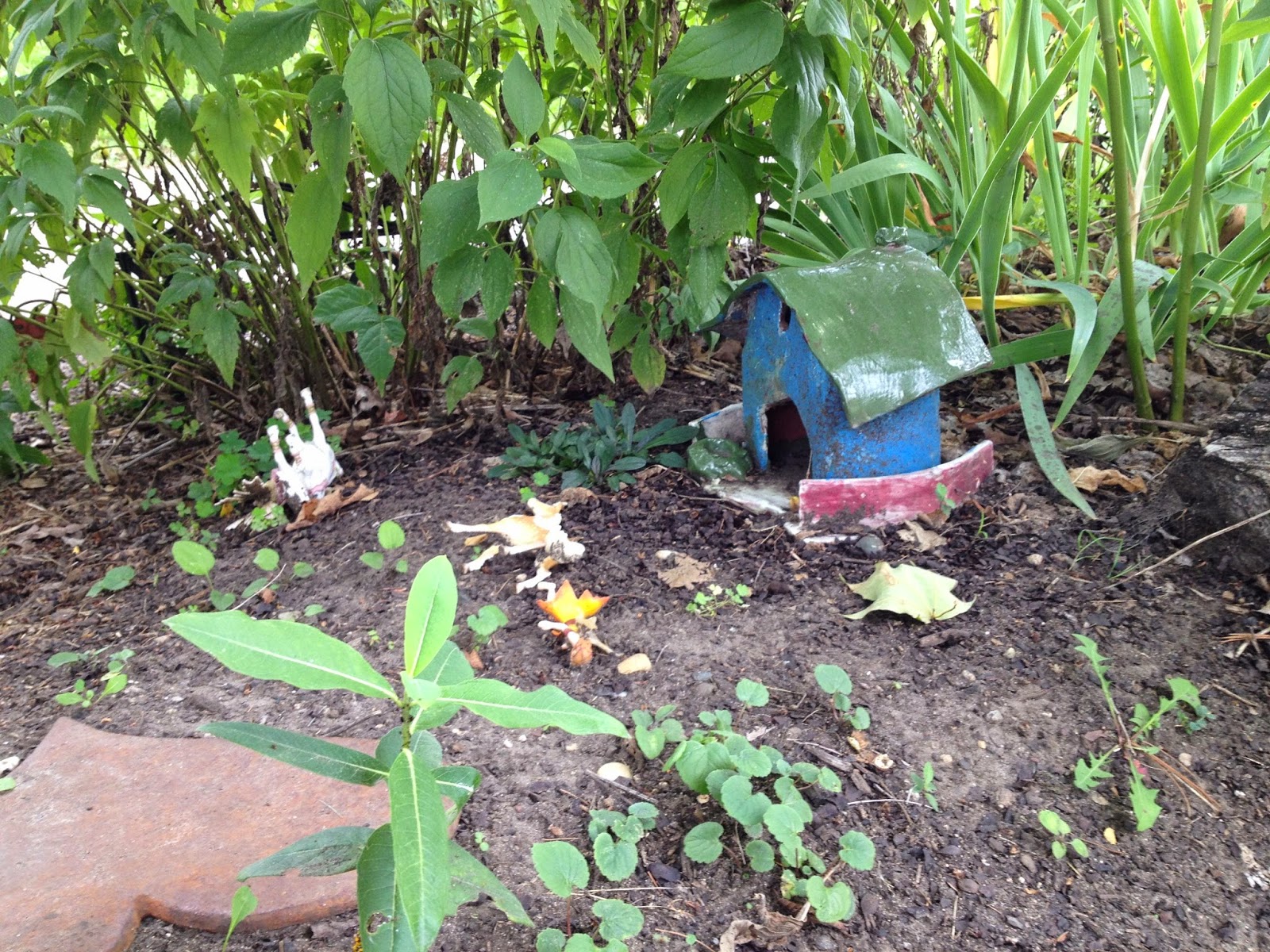 Traces of Play
While a day’s play may come to an end, evidence of play may last. A LEGO brick left behind, colorful leaves arranged in a circle, sticks propped up against the tree, or a sticker affixed to a leaf are vestiges of play that hint of the play this space has enjoyed.


Chalk messages abound in proclaiming children’s ownership of sidewalk sections, the street corner, or the wall. They announce lemonade and cookies. Chalk dreams tell of traveling to outer space. Colored chalk makes anything, even a sewer grate, more beautiful. Writing letters a foot high confers the due importance to a name that no sheet of paper can. A slab of cement sidewalk is transformed into a game board for hopping and jumping. 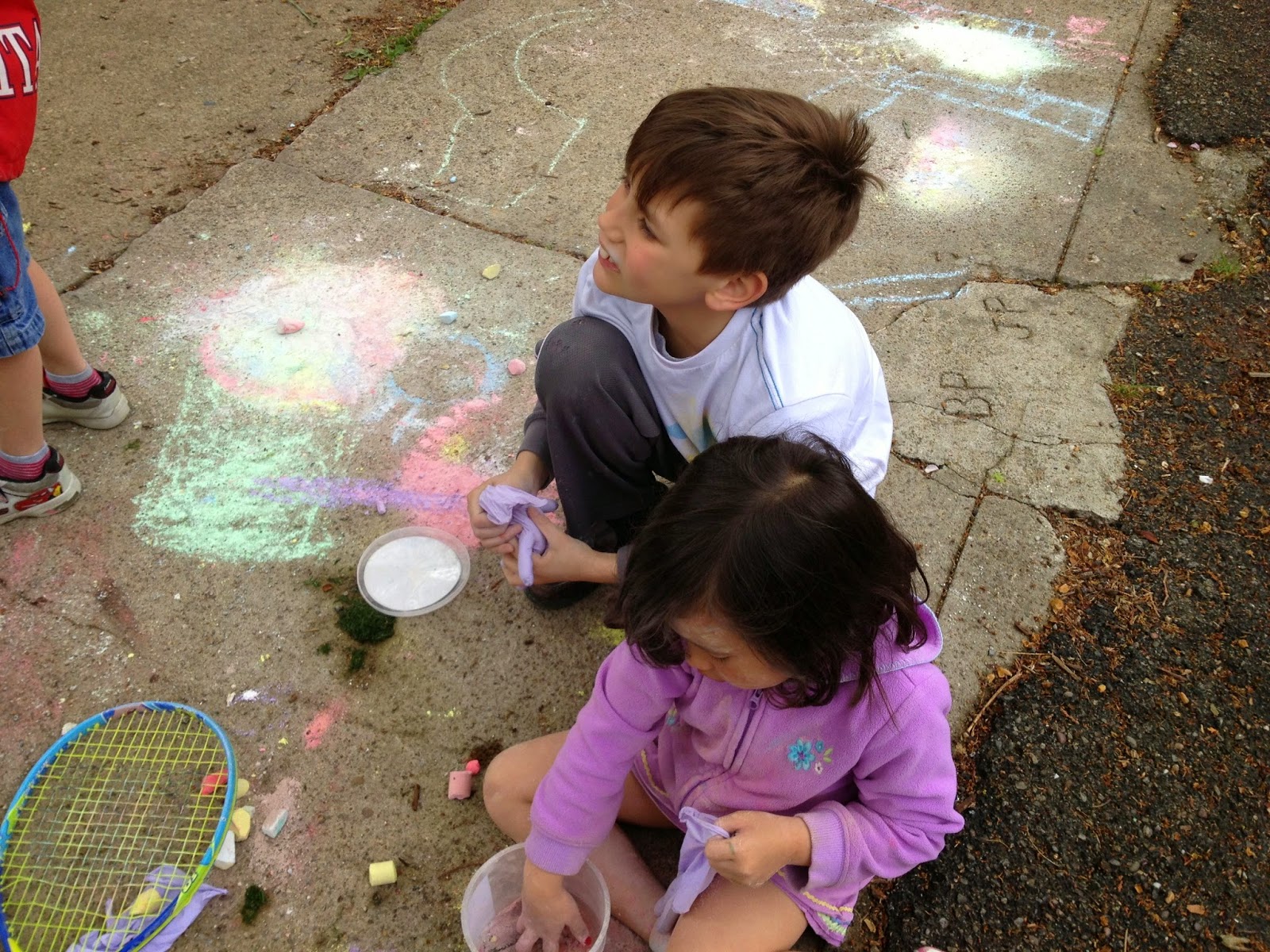 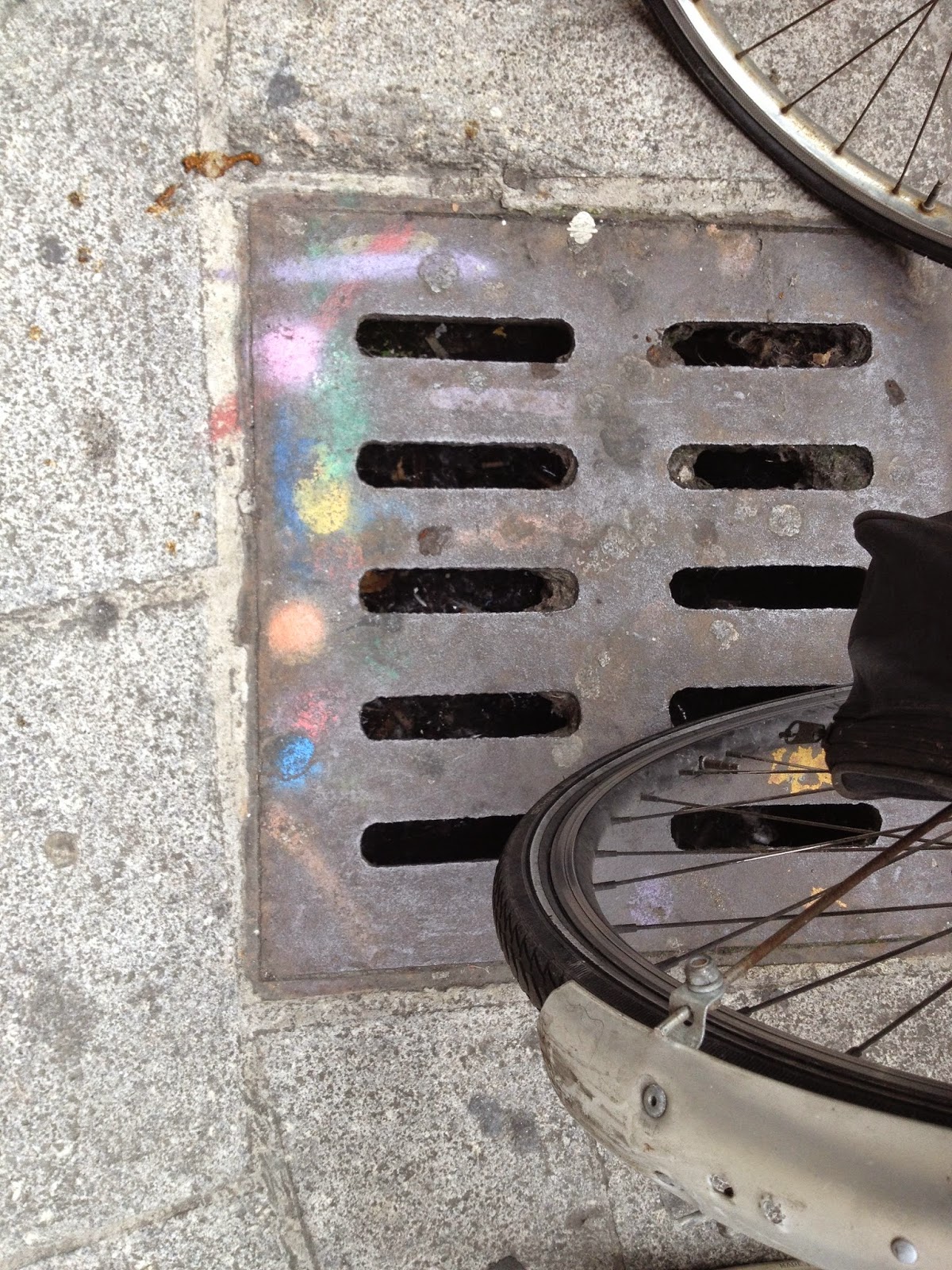 We may not see children play along the sidewalk each time they are out or we are out. After all, children are playing for their own pleasure, not for ours. We may see that they have been playing from some remnants of their play. We have to pay attention. There is something almost ephemeral in children’s play. Very present in one moment, it is suddenly gone with only a trace. It is as if play were a bubble that takes off in the air, floats lightly, and pops when it moves too far from its source.