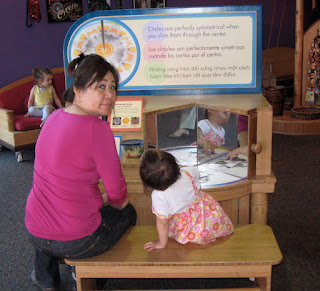 Like many museum professionals, especially in children’s museums, I think understanding and engaging parents  is critical to a museum’s achieving its mission and accomplishing its goals. My sense of parents’ interests has been informed by three decades of working in and with museums: doing programs, responding to comment cards, observing parents, conducting focus groups, and exploring exhibits with them and their children.

Now after spending 4 days listening to parents in several children’s museums as part of a research project, I am happy to upgrade my already positive assessment of parents to one even more positive and better informed by their voices. Parents, regardless of their child’s age or gender, are thinking about and providing for an amazing range of considerations about their children and their museum visit. And I am very impressed.

Some of what I heard was gratifying and on target with museums’ intentions, but was not necessarily surprising. Parents consistently mentioned the variety and originality of structures, materials, toys, and props in the museums. They pointed out recent exhibit and activity changes and additions. They appreciate staff and view them as friendly and helpful. They highlighted their child’s concentrating, pretending, and sharing with other children as something that enhanced their children’s experience and was enjoyable for them to observe in their children.

They valued the level of independence and related freedom the museum environment affords a child without parental hovering. Knowing that other children are supervised by their adults and knowing the museum has limited and controlled exits are critical for parents and grandparents to feel at ease as their children explore. Yet, even when parents appear to be sitting back and uninvolved, they are tuned into their children and focused on the serious work of being good parents and grandparents.

• Parents note and mark their child’s developmental progress over time and in relation to museum activities and exhibits. Unprompted, parents I talked with mentioned how a child’s use of a component has changed over several months; an increasing attention span; doing more activities on her own; or experimenting with materials in new ways. Parents also express a certainty that a child will be into something new in a few months.

• Parents deliberately use what they know their child does naturally–watch them closely and imitate them–in service of larger goals. A mom will turn a valve in a way that allows her daughter to see how it works so she can try it herself.  An aunt uses the word patterns and notices whether her niece uses the word on her own. A mother presses a series of buttons deliberately for her son to see she was making music not just randomly pushing buttons.

• In turn parents are paying close attention to cues their children give as they explore. They note what fascinates a child, the emergence of an interest in music, new concepts their child is picking up, and in which places the child asks more questions. Parents mention the signals they look for that their child wants to interact with them or be with other children.

•  Parents are thoughtfully taking advantage of the museum and visits there to help them accomplish their goals for their children. They visit so their children can socialize with other children. They talk about building their child’s English-speaking skills; they interpret behaviors that are appropriate for different age groups and settings. They make connections with what’s going on in other parts of the child’s life–a doctor’s visit, getting mail at home, or family pets.

It’s difficult to know how representative these parents are of those who bring their children to museums; these interviews are part of an exploratory research project with a focus on play. I did talk with parents and grandparents who had visited before so they know their museum well. Still I am inclined to think that these are not anomalies. The 30 interviews were conducted at 3 museums in 3 different cities. The parents and grandparents were of varied cultural and ethnic backgrounds, some with limited English skills. Parent responses suggested varying levels of education and knowledge of child development. Nevertheless, every parent had a personal and vibrant way of describing the activities they and their child engaged in at the museum.

What was happening in these interviews that I have overlooked for 30 years? The interview questions were good, but not remarkable. Four qualities of the interviews do come to mind that may have contributed to the thoughtful, insightful responses. The questions were open ended; parents were asked to talk about their experience; someone was there to listen; and there was time to do these, even if only 15 minutes.

I can’t help but think that these 30 parents, like many–if not most–parents, are thoughtfully and actively engaged in being great parents and doing so in ways that should thrill and impress museums, schools, citizens, and community leaders.
Posted by Jeanne Vergeront at 9:17 PM No comments: Links to this post

Email ThisBlogThis!Share to TwitterShare to FacebookShare to Pinterest
Labels: Parents and caregivers

The Trouble With SWOTs 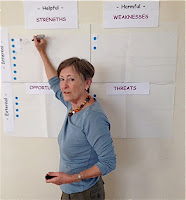 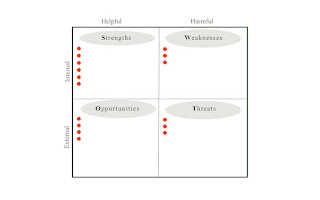 I appreciate the symmetry of a SWOT analysis, consideration of internal and external factors, and an equal focus on helpful and harmful factors. But unless a SWOT analysis is conducted with rigor and unless Strengths, Weaknesses, Opportunities, and Threats are selected carefully, the tool is weak.

An understandable tendency is for a group to generate as many positives, either Strengths or Opportunities, as possible. Equally understandable is the scant appetite most groups have for naming the negatives associated with efforts and enterprises to which they give their time, money, and passion. Wanting to ignore looming threats that could quash hopes or demand more of volunteers is a reasonable impulse, but not a helpful response.

A SWOT analysis was requested as part of a strategic planning retreat for a museum board not long ago. To focus the analysis, I developed a strategic backdrop that synthesized readily available information about the museum’s audience, community and stakeholders, facility, leadership, exhibits and programs. In the retreat the board was going to sort through the critical strategic and operational issues into strengths, weaknesses, opportunities, and threats facing the museum.

“A great staff” was proposed as the first strength. It was followed by a long list of activities the museum had worked on and was proud of: weekly programs, a partnership with the library, a workday to clean-up exhibits, adding a new corporate sponsor, the community. Nothing was said about the board president who was a bit of a bully or the fact that the facility was obviously inadequate in several key respects.

Perhaps my facilitation allowed the strengths and opportunities to be overly extensive, the weaknesses and threats to be skimpy, and at least one issue to be proposed for all four quadrants. I know from other retreats and talking with other planners who use SWOTs, however, this is not unusual.

That’s the trouble with SWOTs. They end up as four lists with somewhat different emphases but no real sense of priority. When a board lacks the practice, shared understanding, or political will, a SWOT becomes a list that leads to flabby goals and a casual commitment to executing the plan. Anne Ackerson recently wrote about precisely this on her blog, Leading By Design.

That’s why I thought my strategic planning buddy, Andrea Fox Jensen was particularly brilliant the other day. She said, we need to ask, ‘Where are you hitting a home run that you really need to?’ and 'Where are you not hitting a home run that you really need to?’ Asking about completed home runs frames a question to get precise, honest answers about how the museum has done in key areas. This question goes directly to achievement and shifts away from intention. Good intentions and even the best of intentions are not results. There are no sort of or almost home runs. Answers to this pair of questions helps distinguish what areas to change and what not to change.

The focus of these questions is by no means limited to the areas above. For one museum communication, collections, and facility might be critical areas to explore in meaningful ways. For other museums, governance and internal capacity might be critical. Focusing on areas that matter and in ways that seriously need to be understood is what is important. So play ball!
Posted by Jeanne Vergeront at 9:36 PM 2 comments: Links to this post