Seeing Children in the City


My last post included mention of some Reggio museum group members preparing for the study tour by looking for traces of children in the city and for evidence of how communities support children. Inspired by their intentions, I have charged myself with thinking about and looking for children’s presence in the city and using the cities I am visiting on my way to Reggio as a provocation. I have been spending a few days in Leeuwarden in the northern part of The Netherlands, in Amsterdam, and in Bologna.

A concept of interest to me for some time and one I have written about previously here and here, seeing children requires both on-going thinking and vigilance to become meaningful. A recent experience reminded me of this when a museum leader involved in master planning asked, “What does seeing children mean?” referring to a core strategy in the master plan. In this setting, the phrase and strategy were not new, but clearly they were neither well understood nor internalized. Several interpretations were proposed by members of the group: valuing and investing in children; recognizing their capabilities and potential; taking children seriously.

As I have traveled by train, tram, bike, and walked in Leeuwarden, Amsterdam and Bologna, as I have waited in airports and train stations and looked about me, I have been asking myself what might seeing children in the city mean.  Although not as simple as the list below, probing each word begins to expose the depth and complexity of 5 words and the wide variety of ways in which children can be visible in the city.
Seeing: Noticing children; hearing their voices; listening to their questions, thinking, and ideas; valuing their identities, differences, and uniqueness; welcoming and appreciating their presence, ways of learning, and play in many forms; making room for them to make meaning
Children: Full of curiosity, capabilities, and potential; full of empathy; with ideas and with many ways of expression; responding to their environment; owning capacity to create and contribute
In: In relationship with others; present and engaged with physical and social, public and civic spaces, not only in the home; at the center of a community’s long-term interests
The city or town, village, suburb, region: Out in the public, in traffic, at play; in places of culture; as active and contributing participants, engaged in real and meaningful experiences

A First Pass at Seeing Children
This exercise does not result in a Rick Steves travelogue, although a Seeing Children In Brussels (or Boston or Reggio) could be fascinating. In fact, visiting cities and looking for children’s presence creates a very different–but rewarding–kind of sightseeing than churches, museums, monuments, or historic houses. A few initial observations have surfaced during a week’s travels. 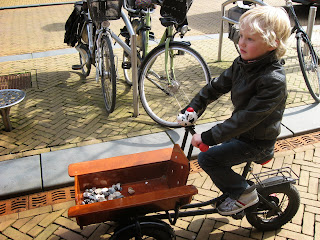 • In Leeuwarden, Amsterdam, and in other cities and towns in The Netherlands where many people ride bikes and take public transportation, children are highly visible, especially compared to when they are passengers inside cars moving quickly along streets and highways. Riding on the front or back of bikes when they are young, riding their own bikes at an early age, or taking trams, children are easily seen to the city as they go to the market, on a family outing, to school, or to visit friends.
• From a very early age, Dutch children travel on the front or back of their parent’s bikes. Perched up high, they see buildings and people, they see their surroundings, and they see where they are going. Riding close to a parent, they have someone to answer their questions and interpret what they are seeing.
• Daily, children ride their bikes considerable distances on their way to school, on bike paths, sometimes paralleling highways, and often in the rain. They go over bridges and under tunnels, cross streets, and signal turns. In moving traffic in a densely populated country, children are considered responsible and are trusted.

• In the Hall of Honor in the recently and magnificently renovated Rijksmuseum in Amsterdam, a group of school children  sat on the floor right in front of Rembrandt’s celebrated Night Watch. In a place of great significance culturally and nationally for The Netherlands, children received the prime spot.

Leaving Leeuwarden and Amsterdam and heading to Bologna, I wondered what I might find there. All cities aren’t­–and shouldn’t be­–the same. Just as their cultures and contexts are different, so will children’s presence be different. I noticed, for instance, that Leeuwarden and Amsterdam are bicycle cities, while Bologna is not. Bologna, it seems, is a city of motorbikes and children in strollers under the porticoes.

In my walking about, I came upon several examples of how the municipality of Bologna, or Comune di Bologna, is supporting places for children in its historic and cultural center.


• Passing through the Palazzo de Re Enzo on the Piazza Maggiore, several windows stood out from among the others. They looked like a children’s store or children’s museum. Stepping inside, I learned about START Laboratorio di Cultur Creative (Creative Cultures Lab) that was opened 2 years ago by a foundation with an interest in the public communication of science and technology–informal science.  START offers interactive programs for children 2 years through high school in families and schools in the sciences and arts and provides professional development for teachers. START is located in a space provided by the Comune di Bologna.
• Just across the Piazza from START is the main library of Bologna. Many libraries have a children’s library, but Bologna's has 3 children’s libraries, one for bambini under 3 years, one for children 3-8 years, and one for youth. In the Bebe library, a group of 3 mothers with their bambini were gathered in a comfortable, intimate space. Babies weren't limited to this space; in the big central hall of the library a father held his toddler up to play with the flashlight in one of the displays.

• On the third level of the library the Urban Design Center, Bologna is located. An exhibit on the master plan for the Comune di Bologna is presented in this space covering plan principles and approximately 25 designated projects for implementing the plan. Among the 10 principles presented and explained–Bologna Ancient and Comfortable, Unites, Is Born Again, Travels, Produces, etc. one, Innovate, highlights children: “…to encourage creativity, to consider its younger generations a resource in which to invest, …” It appears that Bologna does see its children, but does not seem to have taken the larger step of seeing them as creative and as active agents in their learning and in building Bologna’s future now.

Before departing Bologna for Reggio, I found these packs of sugar on the saucer of my cappuccino. 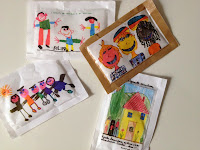 Posted by Jeanne Vergeront at 3:32 AM