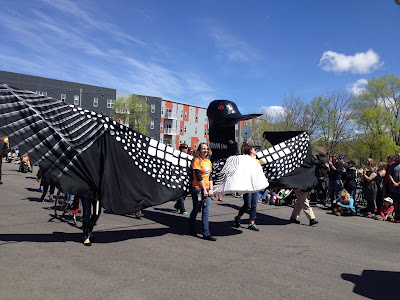 At noon on the first Sunday in May, 50,000 spectators lined Bloomington Avenue in Minneapolis for the mile-long May Day parade that ends with an outdoor pageant and music and dance festival that lasts until dusk. The parade is not always May 1st. It is not always pleasantly cool and sunny. In fact, one year it’s 91º and another year it’s 30º with snow flurries. But the parade and pageant, a distinctive blend of Bread and Puppet Theater, Earth Day, and Mardi Gras, are marvelous–lively, colorful, humorous, joyful, and powerful community experience. 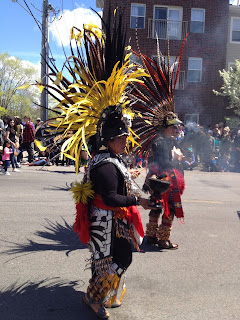 Stilt walkers and hoop spinners; costumed and masked characters; swirling dancers and musicians; and unicyclists in this walking theatrical performance are from the neighborhood, community organizations, and school groups. They are volunteers, friends, teachers, clerks at the store, and artists. Cheered on by the crowd, they become the celebration of spring, dancing down the street, pounding on tambourines, pulling floats, pushing carts, and carrying banners. At the pageant in the park, the Tree of Life awakens from the darkness of winter and rises to the steady beating of drums. A festival of food and music extends the celebration to dusk.

The Heart of the Beast Puppet and Mask Theater’s (HOBT) annual May Day parade is not just a great way to spend a fine Sunday afternoon or a rite of spring. Honoring many cultural traditions, showcasing local talents, and giving voice to many, it is a grand and festive expression of community engagement assuming many forms and reaching back 42 years.

Preparations begin months in advance and are nurtured by the creative vision and community spirit of Founder and Artistic Director Sandy Spieler as well as HOBT staff and friends. Groups and individuals, newcomers and veterans come together regularly in the social and creative environments of HOBT’s Community Build Workshops. More than two hundred committed participants help in workshops and construct 20-foot puppets and floats that punctuate the parade. On the day of the parade and pageant, 2,000 participants dance and boogie in the parade, carry water, hand out maps, serve as parade marshals, and star in the pageant.

Over 4 decades, the Heart of the Beast has become a catalyst for the creativity and connection that make community visible. 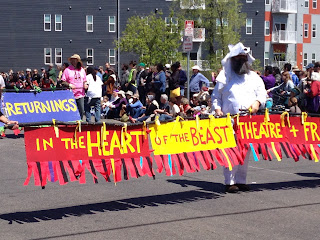 Rich and varied expressions of community and connection are everywhere along the parade route, in the banners and bantering, cheering, and in the strains of the parade’s anthem, “You Are My Sunshine.” The community workshops, much of what happens in the months leading up to May Day, and on the parade route itself is relevant to museums’ efforts to engage more fully with their community and friends. Several qualities strike me as particularly relevant and adaptable.

A roomy vision inspires and invites groups to craft their own messages. Much as a museum’s vision and mission guide and inspire its campaigns, initiatives, and community work, HOBT’s mission to create vital, poetic theater for all ages and backgrounds inspires the annual parade and its theme. Radical Returnings was the 2016 parade theme. 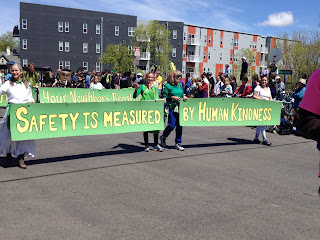 Each section of the parade carries a message which may be poetic, serious, or humorous. Groups of like-minded individuals compose messages to share on banners and signs along with elaborate costumes. The Rivers Have Called Upon Us honored Berta Cáceres the Honduran environmental activist who recently passed away. Dozens and dozens of fantastic costumed crabs, snails, lobsters, and hermit crabs swirled around a banner asking, Feeling Crabby? In the spirit of a community event, the parade is capped off by the beloved and sometimes zany, Free Speech section with banners, signs, and floats announcing causes and issues.

My personal favorite among the sections: a banner announcing, Safety is measured by human kindness. 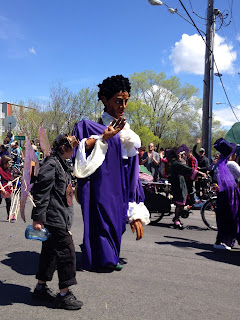 Everyone gets into the act. During the 6 months of public parade preparation (internal work at HOBT begins on the heels of the previous parade), there are multiple opportunities to engage and connect. Opportunities allow both extended and briefer degrees of involvement. This openness to anyone and everyone participating reveals itself on May Day as a celebration by, for, and with the community. Babies through elders march in the parade and sit along the parade route. Spectators see cousins, teachers, and neighbors marching, waving, and singing. Local bands and cultural groups play and dance in the parade and at the park. Hometown music idol, Prince, was honored as a larger-than life puppet leading a parade section.

The parade spills into the crowd; spectators become participants. More than a few of the 50,000 spectators become participants along the way. Happy May Day greetings from paraders invite responses from spectators. Strains of “You Are My Sunshine,” fill the air and the crowd sings along and claps. The banner, Howl for the Whole Earth, elicits howls from paraders and spectators that last long after the banner has passed–just for the fun of it. In a quieter moment, a giant fish approaches a young child holding a very large snail made of clay in its hands. The fish asks the child, “Can you take care of this snail for the rest of us?” A quiet conversation follows. The child accepts and solemnly holds the snail for the duration of the parade.

A joyous blend of serious and silly. The edge between silly and serious blends and blurs moving the parade along in a spirit of joyous celebration. HOBT stirs imaginations and offers the materials– water, flour, newspaper, paint tape, and lumber–to tell stories, explore the struggles and celebrations of human existence, to build and create. It is also a welcoming place that individuals and collaborative groups can inhabit.   Rollerbladers and cyclists on tall bikes, backwards bikes, and unicycles cruise through the parade. Some, like the Southside Battletrain, build their own creations. This Mad Max" esque, bicycle-powered float has preceded the parade over the last few years, treating the crowd to new features including a Ferris wheel, band, and bar-b-q. 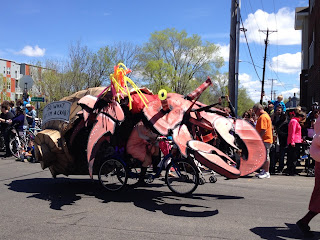 Not every museum will find a "Mad Max" esque, bicycle-powered float with a Ferris wheel, band, and bar-b-q to be an expression of its community engagement intentions. But it does suggest that every museum can become a catalyst for  the creativity and connection that strengthen community and make it visible.