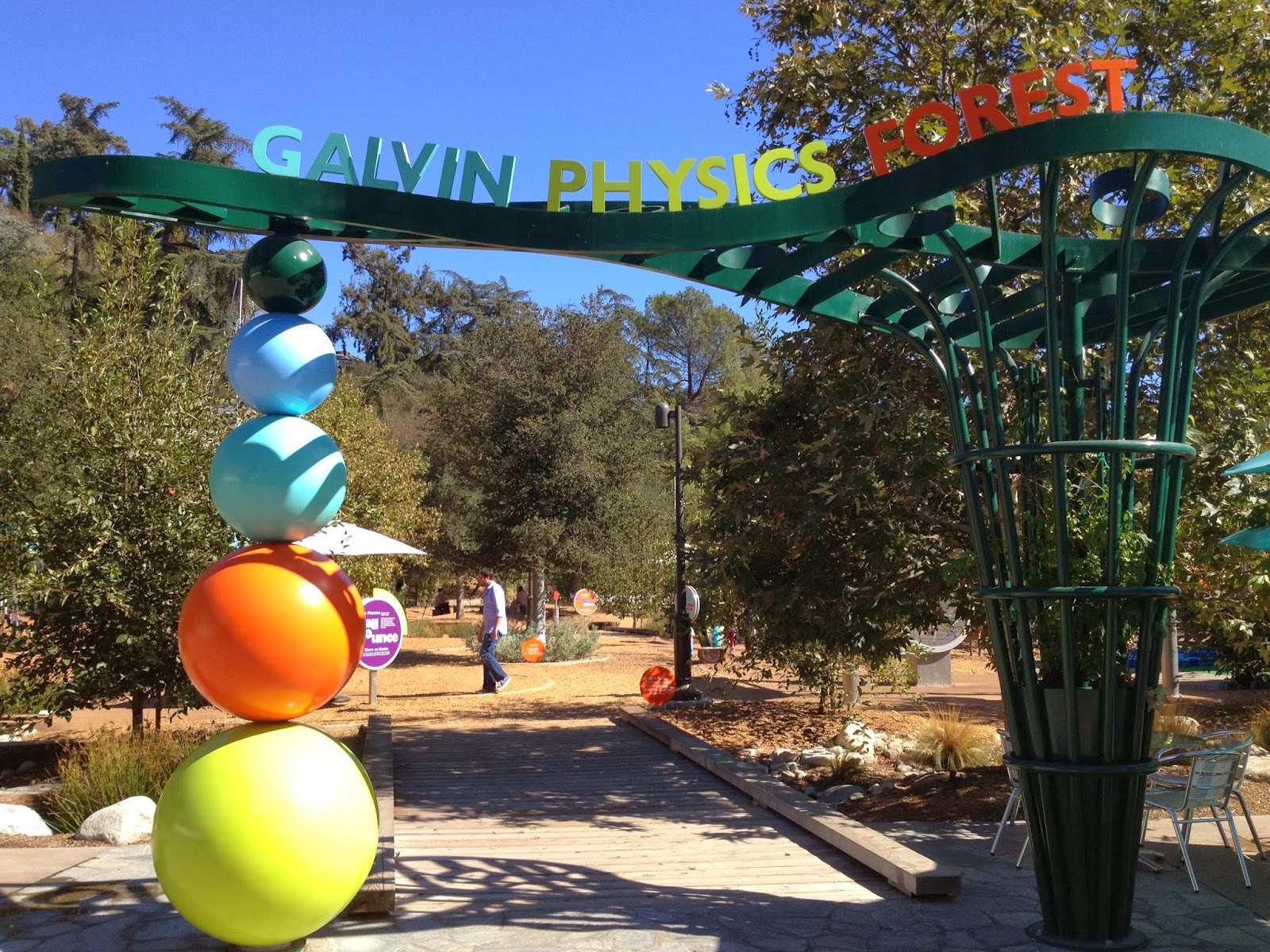 On a recent Saturday afternoon in January, the Galvin Physics Forest at Kidspace Children’s Museum (Pasadena, CA) was full of families with children of all ages, from babies in backpacks and strollers to “big” kids 9 or 10 years; in adult-child pairs; with grandmas and grandpas; and in families of families.

I’ve made several observations in the Physics Forest on two visits to Kidspace, on both a weekday and a weekend, in fall and in winter. Every time I have observed and listened, I have heard laughter, lots of laughter. Even belly laughs float across the site. Shouts of delight, like, ”I did it!” and “This is so cool!” also come through loud and clear over the chatter.

Physics experiments are not unusual in children's museums where children explore the forces and motion that shape our world. Active learners and enthusiastic players, children are interested in making things fly, bounce, spin, and roll. They are intrigued by what they can do to pop a ball, get more lift to a rocket, or blast the bottle. Physics experiments make children’s ideas and efforts visible to both them and to adults.
In fact, many of the experiments in the Physics Forest are just like ones in many children’s museums. Several features, however, distinguish the Kidspace Physics Forest from physics exhibits in children’s museums as well as many science centers. It’s big, it’s outdoors, and it calls attention to how bottle rockets and tennis ball launchers, pulleys and air cannons are physics. Having a physics exhibit makes sense for Kidspace with the California Institute of Technology as a neighbor and Caltech astrophysicist Dr. Mike Brown as a KCM board member. (Check out an interview with him in Hand To Hand.

Designed by Hands On! Inc., the Physics Forest opened in summer 2012 with 13 physics experiments on a 26,600 square foot site. The 12 stations are: Bottle Rocket, Tennis Ball Launcher, Ball Bounce, Pulley’s, Wheel Roll, Magic Mirror, Roller Coaster, Ball Range, Pendulum, Air Cannon, Giant Lever, and Cool Fan. Sun Splitter, a 13th experiment, was recently removed because it required multiple adjustments by staff daily. Generally, two staff were present in the Physics Forest. One moved around the site. The other was stationed at the Cool Fan, the experiment that seemed to invite the most creative use from children.

The arroyo-inspired landscape is a natural site for exploring. Experiments are planted among native plants
and substantial trees. Winding paths both define and connect the experiments sometimes crossing dry steam beds with immense slabs of wood. These same slabs provide generous seating around the site. Smaller play spaces with related activities, like building and sound makers, are scattered among the experiments and sunshade covered. Pasadena’s 70º sunshine completes the splendid outdoor conditions for exploring physics.

Multiple entrances to the Physics Forest allow children to start anywhere and easy visual access across the site makes it easy to navigate and be visually oriented. Pathways invite children and families to wander and follow their interests. Some children find and stick with one activity; others try a couple of experiments before discovering one that really engages their attention. Children call out to one another, “Abby, this is fun. Come to the Tennis Ball Launcher.”

While some experiments seem more popular than others and some seem easier to use, I was impressed overall by how engaged children and adults were in exploring, trying, talking, observing, and helping. Three qualities associated with engaging museum experience and learning come through in what I heard and observed.
• Everyone gets into the act
• Extended explorations
• More than physics in play

Everyone Gets into the Act
Children work together sometimes calling out suggestions to others, as a boy at the Giant Fan did, “Get some friends to help.” Getting into the act is made easier with multiple positions that most of the experiments offer: 3 inclines on the Wheel Roll and 3 seats at Pulleys; 2 stations at the Ball Bounce and 2 Giant Levers. An experiment like the Cool Fan requires extra pairs of hands and the combined efforts of several children. The generous space around each experiment accommodates several people to gather

When the ball escaped the Tennis Ball Launcher, one whole family worked together to get it back in the basket. The 2-year old cried, “Oh no!” The 4-year old asked her dad to lift her up and throw the ball in; “Too low” she observed. The 6-year old chased the ball and tossed it into the basket several times but missed. In the end the grandmother made the basket, and the experiment resumed.

Adults who often hang back and watch children explore definitely were part of the action. One child called out, “Mom, help me,” when she wanted to be hoisted up at Pulleys. But parents also drew their child’s attention to an experiment with, for instance, “Look at the wheels you can roll over there.” Adults served as physics coaches for their children. At the Giant Lever, a father advised his 4 year-old daughter, “Use all your weight. Look where you are putting your feet.” At the Air Cannon, a father pointed out to his daughter not only how it worked, but some variations she might try.

While there’s a high level of engagement, not everyone is focusing on the experiments. One small girl delightedly plowed through the bark mulch on her belly near the Tennis Ball Launcher. At the Roller Coaster a 4-year old boy was far more interested in accumulating balls than constructing or testing a coaster. Oblivious to the physics focus, an older girl used the wooden planks across the dry creek bed as a balance beam.

Extended Explorations
Designed as platforms for open-ended science learning through play, the experiments encourage self- guided exploration. Children and adults talk, ask questions, investigate with levers and ropes; they watch balls pop up and roll down. Noticing the effects of what they do, they share tips, refer to the text, talk some more, building intuitive understandings about how things work.

In the Physics Forest, related physics content is near, clear and accessible. These bold, can’t-miss, two-sided graphic panels stand at every experiment. Their 4-part message–Try It!, Play With It!, It’s Physics, More at Home–follows a typical exploratory process.

Clear accessible text, however, has a hard time competing with active exploration as a source of information about what’s happening. Having other players to watch and talk with, loose parts to combine in multiple ways, and satisfying visual effects extend even casual explorations. This was most apparent at the Roller Coaster. Always filled with activity, 15-20 adults and children working in 3-4 family groups while more watched from the benches was not uncommon. Children shouted out ideas like, “Let’s try this curvy one,” upon discovery of a rounded piece of track. A 4-year old’s joyful, “I know, I know, I know” was followed by a flurry of extending track and testing the run. Children were impressed with longer runs after following performance tips about the height of the entrance. One girl’s persistence paid off with new strategies for starting the ball at higher and higher points. Another rolled a ball, watched it, fetched it, and asked, “What happened?” only to try again. Steady and extended activity was punctuated by, “That was amazing!”

More Than Physics in Play
Play and science learning assume many forms and reflect developmental differences among children, whether it is impatience waiting for a turn, making and revising predictions, or taking a systematic approach.

Three children at the Bottle Rocket filled the bottle with water to different levels, launched it, and watched it fly. The 4-year old boy suddenly waved his arms and announced that he knew that the full bottle would fly the highest. His 9-year old sister set about systematically testing 3 conditions. She hit the button to fill the bottle to a low level; the bottle flew up part way. The boy was very pleased with that. As the older sister prepared to fill the bottle halfway, their 2-year old sister dashed in and hit the full button. The full bottle flew up, rising only part way. The third bottle, filled halfway, shot to an impressive height compared to the other bottles, thrilling the boy. Pumping his fist, he shouted, "I knew the half-filled bottle would go the highest. I knew it!" Like a typical 4-year old, he was happy to revise his original prediction in order to be right.

The large-scale, highly interactive experiments are platforms for exploring how the world works, but they support many kinds of learning as well. Along with children making predictions, and engaging in trial and error, they are taking turns and asserting increasing independence as a 4-year old did with, “I don’t want any help” to dismiss his parent’s offer of assistance. Children engage in friendly competition announcing, “We won!” and express their sense of accomplishment with, “I did it!”

The Physics Forest also supports possibilities that designers and physicists are unlikely to have imagined. As a 3-year old peered into the Mirror Maze, his father asked, “What do you see? Does it look weird?” After a pause, the child replied, “Maybe I can see the sunset.”
Posted by Jeanne Vergeront at 6:33 PM