Snapshots of Children at Play 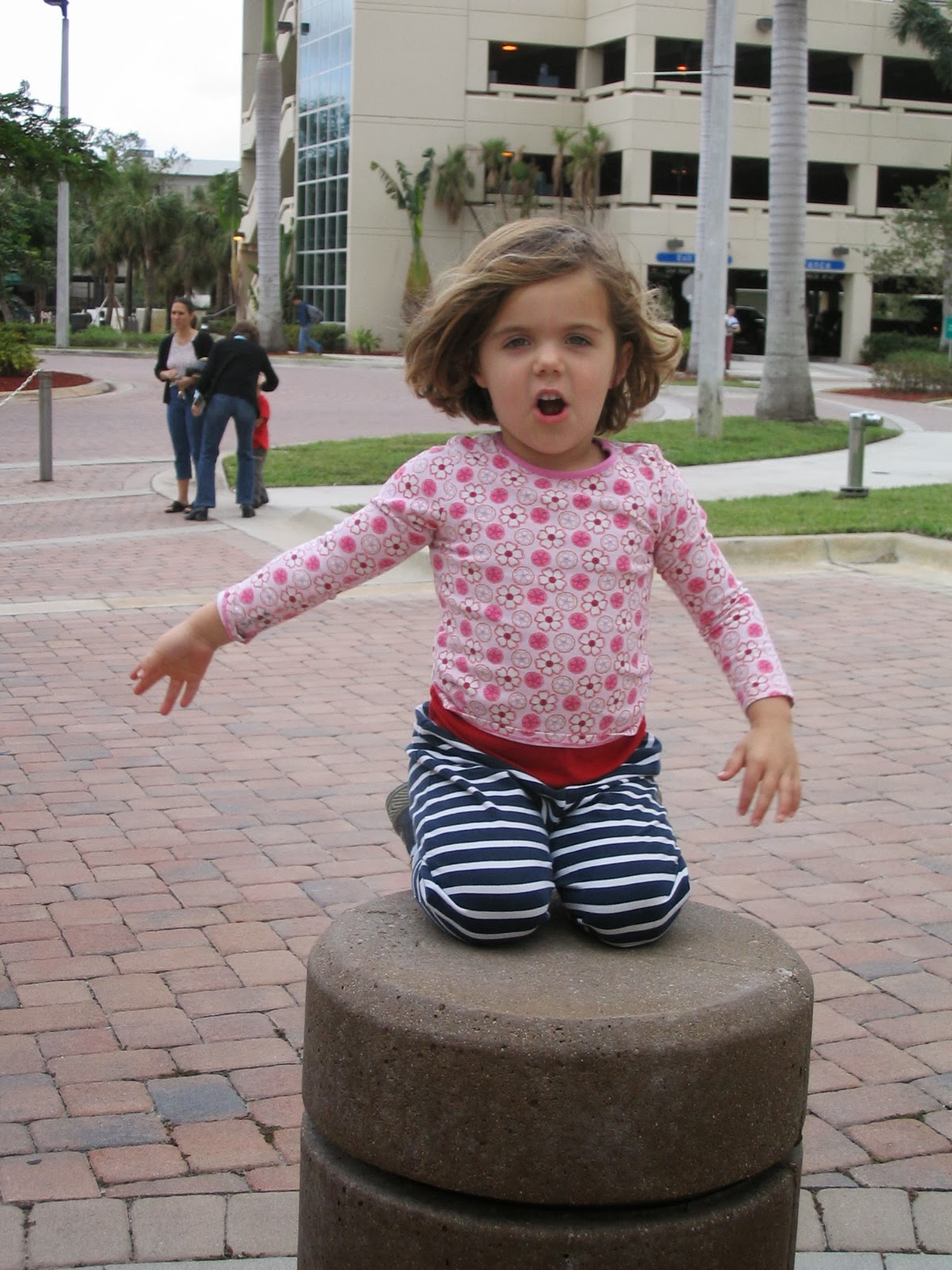 It’s a great day when I see children chalking the sidewalk, watch a toddler pushing chairs through the airport food court, or catch that exact moment a girl dunks her head in the museum water table. I love to watch children play and hear their conversations in these places. How they use, explore, and amuse themselves in spaces and with objects and materials fascinates me. Whether they are actively engaged in places planned for play, like museums, parks, playgrounds, and back yards; or in places not planned for play, like airports, stores, restaurants, and hotel lobbies is equally interesting to me.

Watching children use pancake turners to play a game of carpet tennis in the living room or straddle two chairs in the museum café to make a bridge grabs my attention. A flurry of questions zips through my mind: What is that child wondering about? What is she thinking? What is he trying to do? What does she make of what just happened? How did they ever think of that? Where between imagination and reality is she?

These are big questions and not easy to answer, but they are insistent. I have no doubt that, in moments of play and exploration of objects and spaces–whether or not adults have provided these objects, materials, and spaces for play–children are generously inviting us to glimpse their ideas, thinking, what intrigues them, and how they are experiencing their surroundings. So very rich, such moments of play, exploration, discovery and reinvention deserve more of our attention than we give. 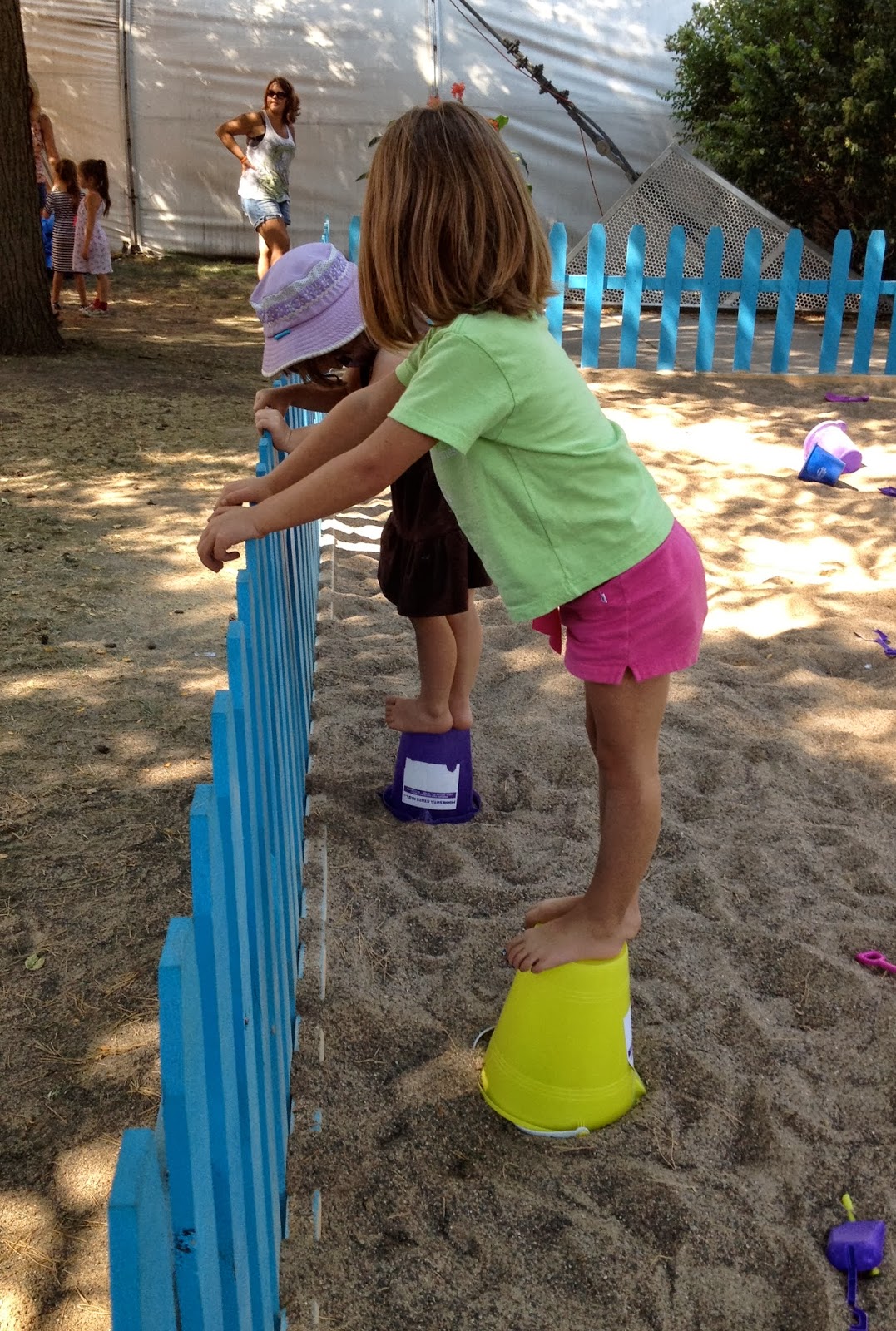 Snapshots of children at play follow along with some thoughts, afterthoughts, and questions about what these children might be doing or thinking. New possibilities emerge about what might be going on as well as the call to more watching, listening, questioning, and discussion in order to better create experiences, places, and objects for children’s play.

Standing on the Bucket
Two girls are standing on plastic buckets in a sand play area at the Minnesota State Fair. Are they finding ways to be taller or get a better view? Practicing balance or pretending they are on stilts? Perhaps they are testing whether the plastic buckets will buckle under their weight. Thinking about this more, I wonder whether the older girl on the bucket has seen someone else do this and, curious about what it might feel like, follows that example much as the younger girl on her right might be doing.

Fitting In Between Spaces
Gathering in this small space, these children show an interest in fitting into in between spaces. What is the environment suggesting? Are they understanding these spaces with their bodies, taking a measure of their size in these spaces? Curious about the feel of roundness or the squeeze of small spaces? Do small spaces give them boundaries they can be in charge of and where they can talk easily in a small group? Do their voices sound different to them in that narrow space? Do they find the feeling of being somewhat hidden pleasurable? 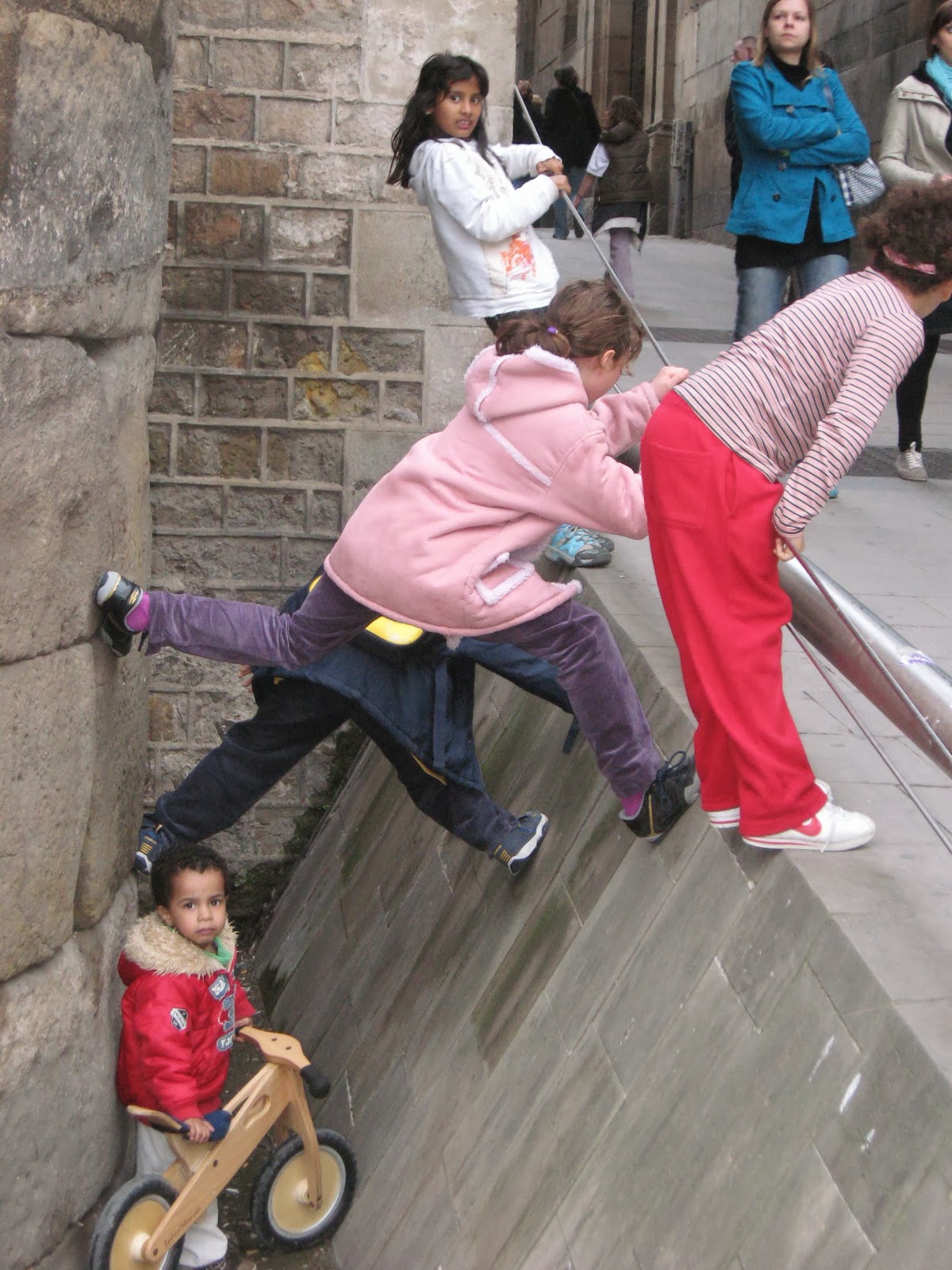 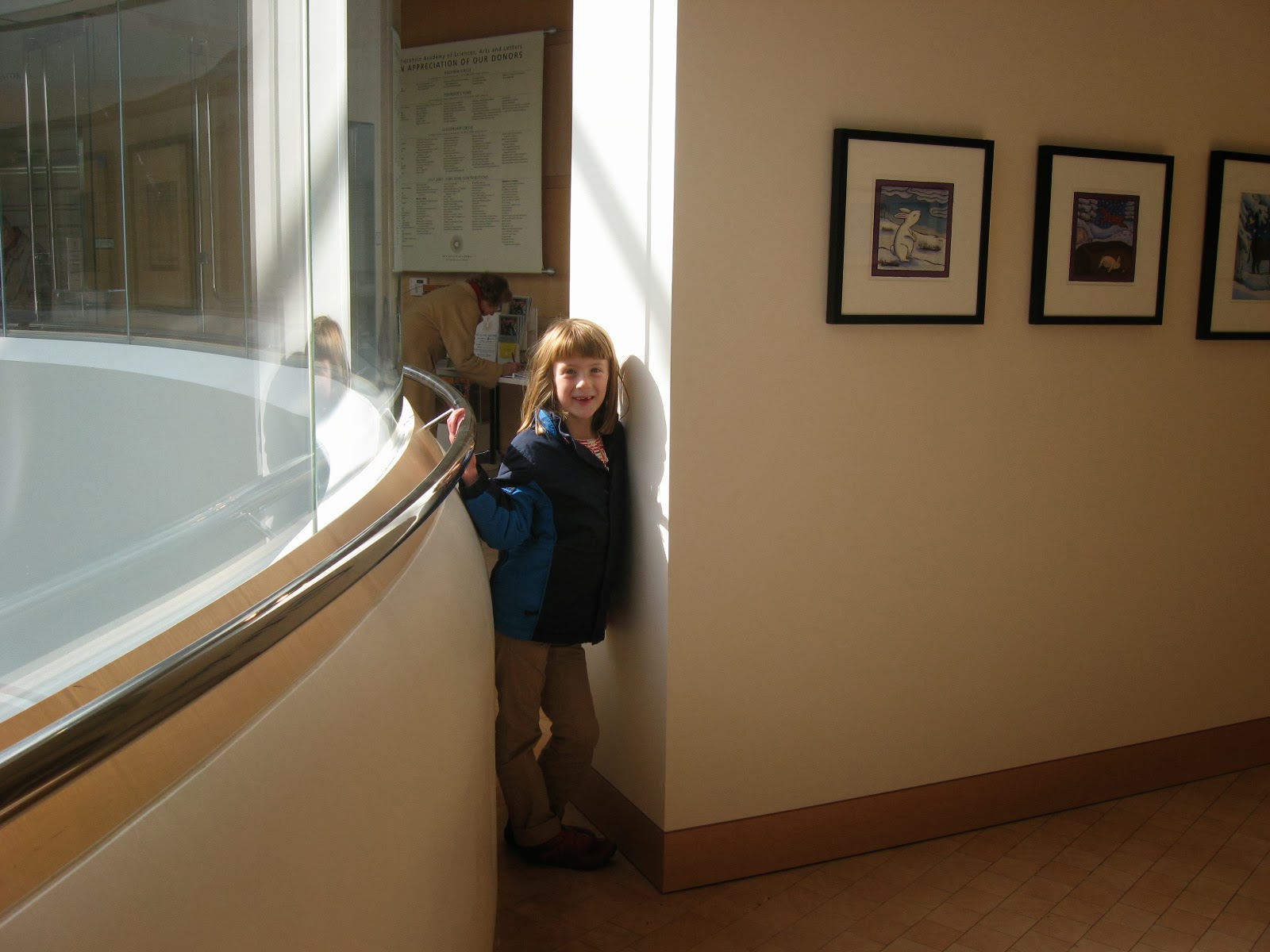 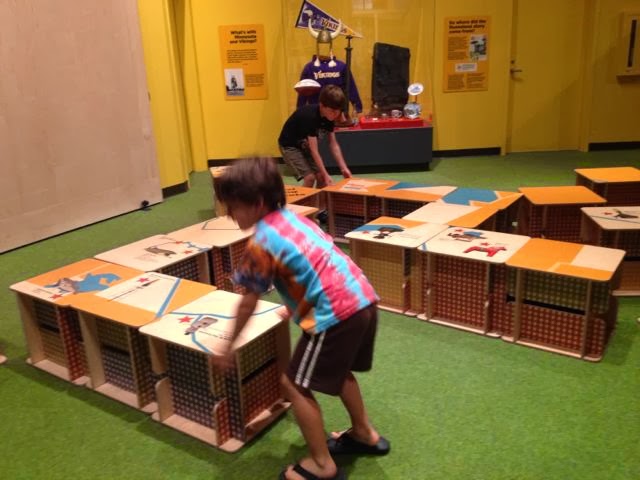 Moving Stools, Changing Space
Two boys were very absorbed in rearranging the stools in the Babe the Blue Ox Pavilion at the Minnesota History Museum. They pushed the cubes around, moved them together, lined them up, and stacked them. They walked on top of and between the cubes. Was their interest in moving and pushing the cubes or changing the space? Did they have a structure in mind? How did they imagine the small space that fit just one boy? Were they noticing the graphic image on the top of the cubes? I thought more about seeing this like the toddler pushing chairs in an airport food court. 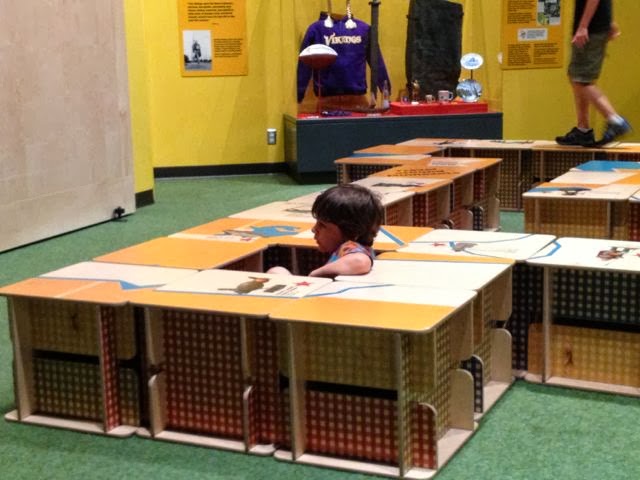 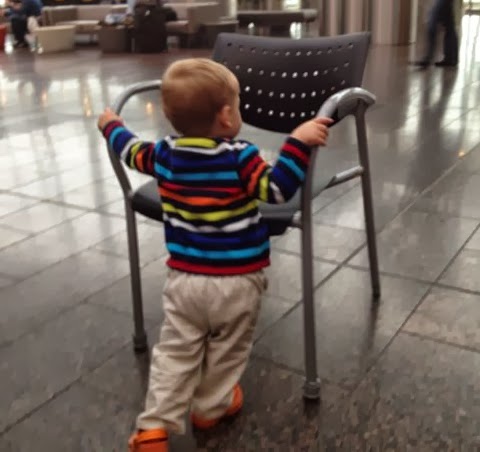 Seeing, But Not Seen
In some big spaces, children crawl under a chair or a bench. Being underneath, they look out and see others, but are not easily seen themselves. How does it feel to these children to be enclosed in a very small, rather than a big, space? Does the brightly lit space beyond appear different from the relative darkness underneath? Might these children be thinking that they have found a space that fits them, but not adults? Do they imagine they can be seen by others? If I’d been able to listen in, what might they be saying about what they see? 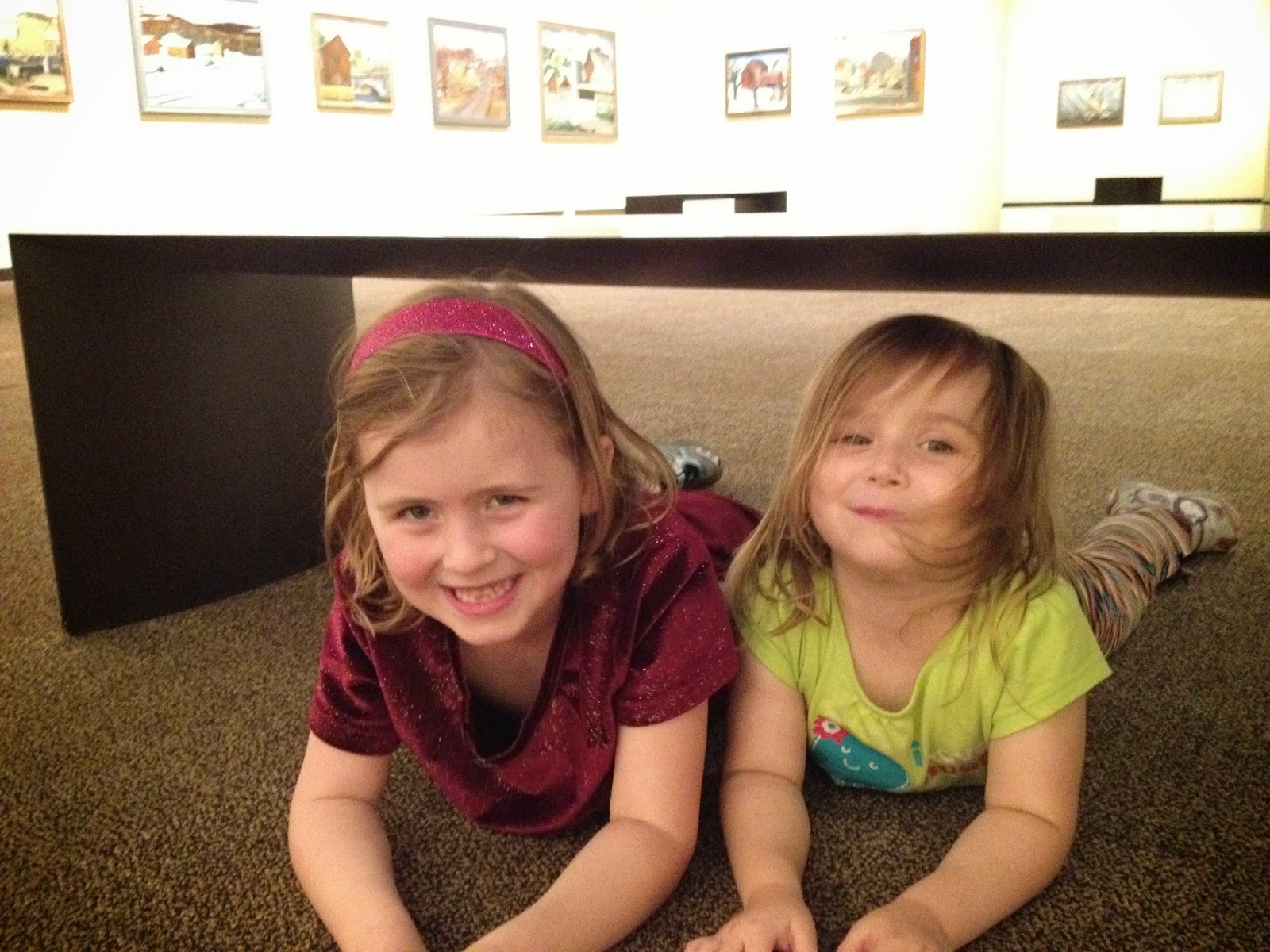 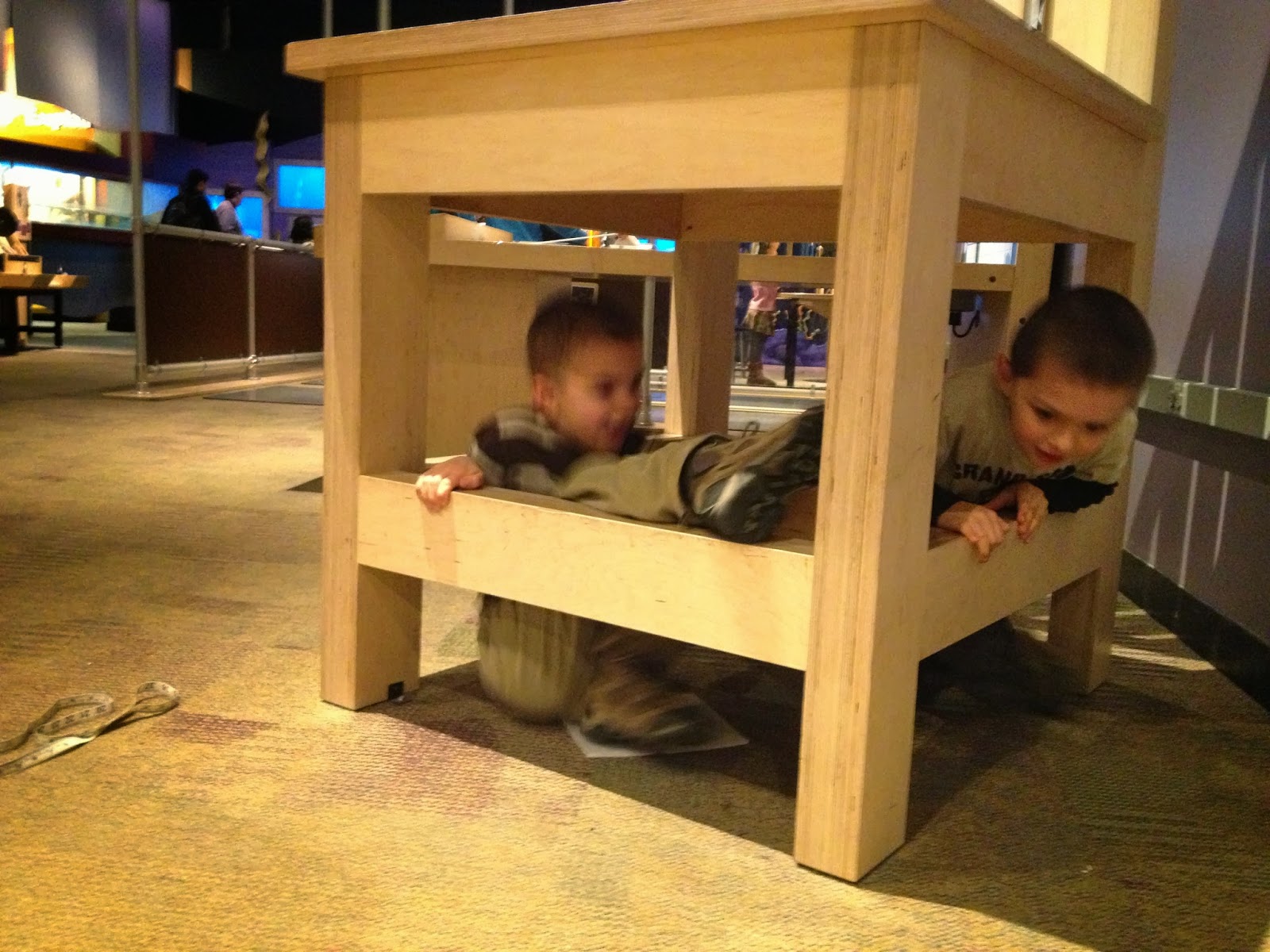 Hats Off
Children stand before a giant fan at the Art Car Parade in Houston. They set their hats on their heads and step close to the fan. Crouching a bit, they hold still until the fan blows their hat off; they chase it and soon take their place before the fan once again. Is this more like a game of chance or an experiment with air? Or elements of both? Do they adjust their hats differently to make it harder or easier for the fan to blow off their hats? Or have they found a particular way to hold their heads? What do they imagine lifts and carries their hats? Are they interested in the feeling of the air blowing across their heads? 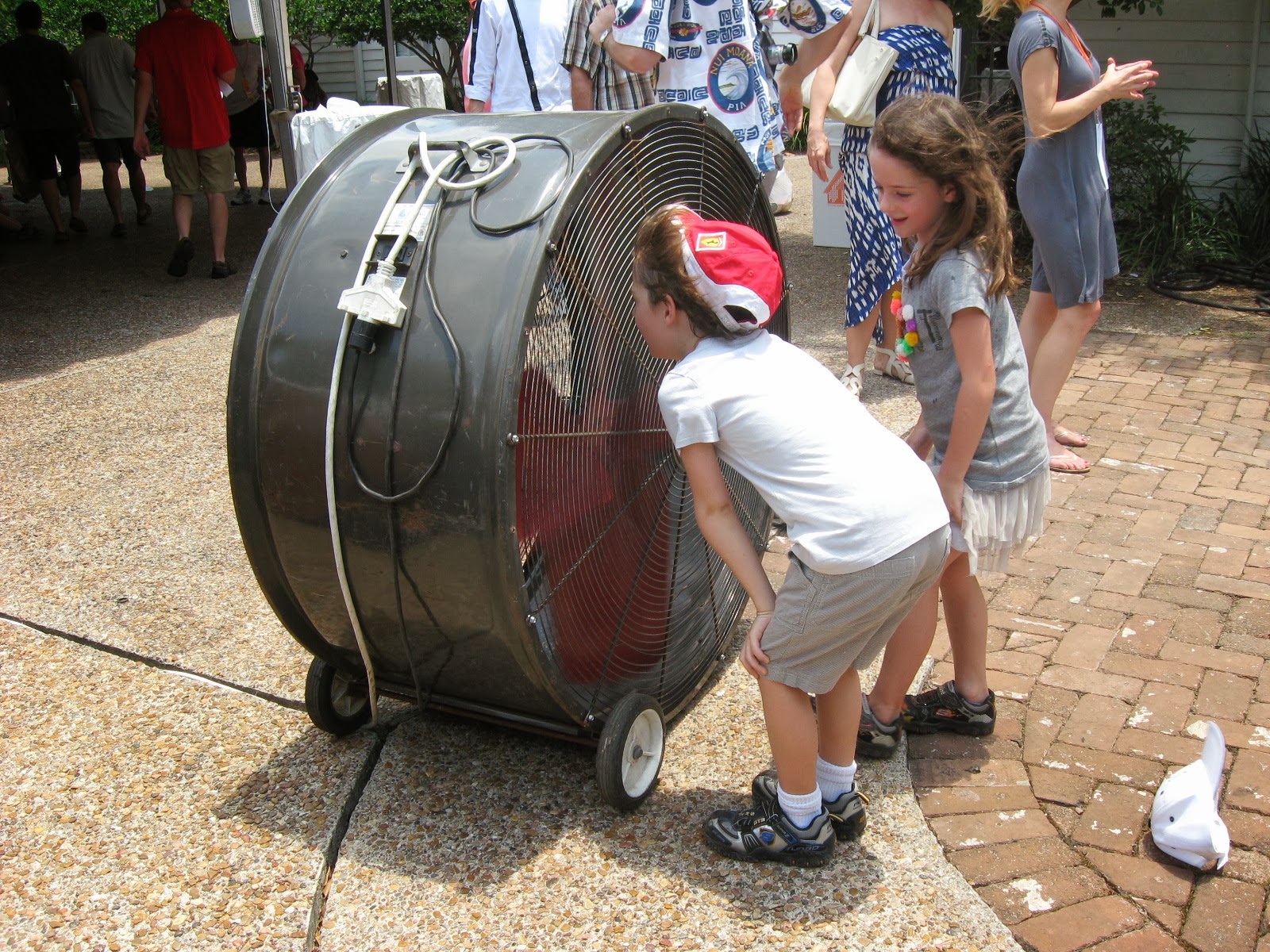 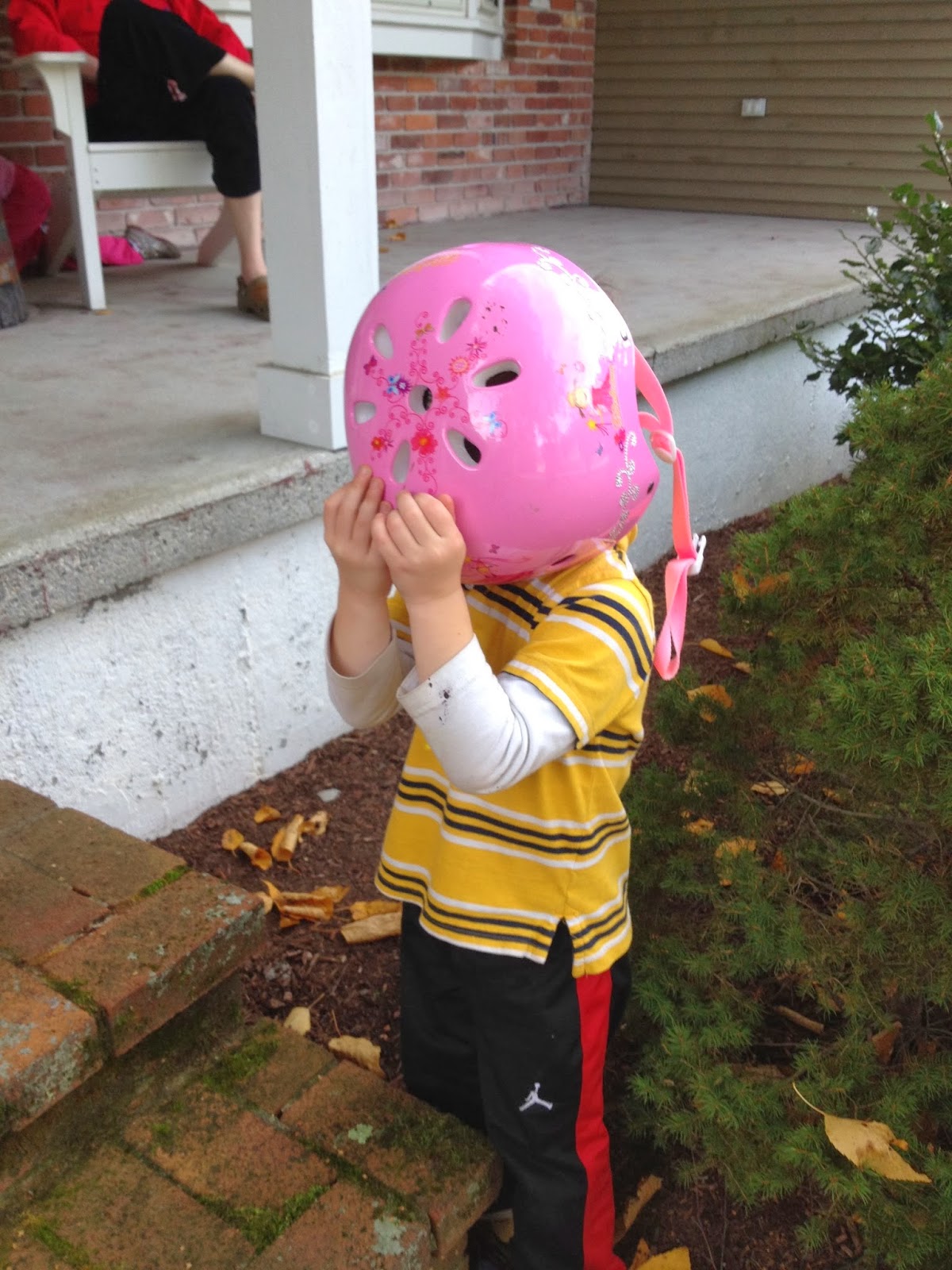 Robot Face Mask
Gabe, who just turned 3 years old, held a pink bike helmet over his face and growled, “Robot.” Animating the helmet, Gabe careened back-and-forth across the front yard and repeated, “Robot, robot, robot, robot….” for about 5 minutes. In what ways did the bike helmet suggest a robot face to Gabe? What did Gabe imagine he looked like? Later, when I looked at the photo more carefully, I wondered when Gabe noticed that he could see through the holes in the helmet? Noting that for very young children, doing is thinking, how did running make Gabe feel more like a robot?

Looking at What’s Going On
Full of playful energy (and slightly risky) these snapshots invite us to wonder whether there is imagination or mischief in these children’s use of materials and objects. Is it creative play? Is it a moment of practice or creation? Is this child testing a theory about the piece of the world he is exploring at that moment?

We might also ask exhibit and program planners, educators and parents whether stepping on buckets or wearing a bike helmet as a robot face leads them to think more deliberately about the features of objects and what they afford a child in play? Can these and other snapshots be inspirations for experience design that supports and encourages children's exploration, working their experience base and imaginations more fully? Are these invitations for adults to play? Can they be a call from our own memories of play?

Watching children play is a way to follow them, look and listen intently, and think about what's happening. What do you see children in children's play? How do you share it? How do you use your observations to reinvent places and objects that encourage, support, and extend children’s thinking, imagination, and energy in play?
Posted by Jeanne Vergeront at 10:00 AM

Email ThisBlogThis!Share to TwitterShare to FacebookShare to Pinterest
Labels: Play