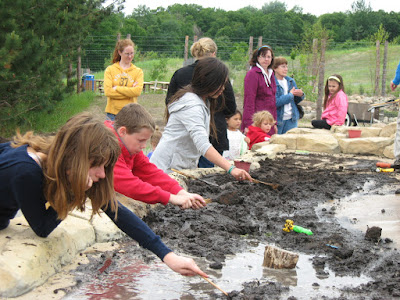 “Do you want to make mud with me?”

I was flattered at this invitation from a four year old girl at the recent opening of the nature play area at Tamarack Nature Center in White Bear, MN. It was just one of many expressions of enthusiasm, excitement, and delight from the hundreds of children, parents, grandparents, and neighbors who welcomed the addition of a regional resource for outdoor play.

Located about 20 minutes north of downtown St Paul, Tamarack Nature Center is in the process of transforming itself from a traditional nature center to a community resource in the region’s well-being infrastructure. This has come about through a fundamental rethinking of experiences in and with nature that Ramsey County Parks and Recreation has undertaken over the past 7 years. The nature play area, occupying approximately half an acre of the 320-acre nature center site, is the first of several planned destinations for discovery.

This is a kind of “nature’s backyard” where children can play freely, explore the outdoors, and connect with the natural world. These play environments hearken to the wood lots, fields, stream edges, and rocky outcroppings where generations of children have played and that now surface in  environmental autobiographies. The area’s stream system, rock walls and caves, logs and hollows, gardens, and (naturally) mud play was designed by MIG, a Berkeley CA firm that plans, designs, and manages children’s environments and programs.

The space isn’t perfect. It’s not entirely natural; it’s not completely finished; and the first year plantings haven’t taken hold. But as a nature’s backyard it works. It is a great big invitation to children to play. As I watched them explore the areas, children were up to their elbows and knees in all forms of nature play and loving it, in spite of the unseasonably cool weather that morning. And while adults worry that children aren’t playing and don’t know how to play, these children were active and engaged. They explored, took risks, got dirty, and completely soaked. They worked with other children, tried out ideas, and had fun.

These children showed they know how to play. Given our concerns about how children are playing outdoors, we might follow their cues about what happens when the get outside and play.

Sand, dirt, and water call to children. The 4 year-old girl that I met probably doesn’t often spend time in or with mud. But she knew what she wanted: mud. Children are drawn to the feel of water, the brush of sand, and the squish of mud. The roll of gravel, the heft of rocks, and the rough of bark are inviting, interesting, suggestive textures. They are qualities that  define the loose parts that children roll, move, lift, carry, pile, and stack. They enhance the possibilities of objects and they multiply the possibilities of play.
Place matters in play. Outdoors or in, children’s play is grounded in a place. Children shape spaces, name places, spin stories, add details, and navigate prominent features. In nature’s backyard, children quickly responded to place-making features and set about transforming places. They changed the stream’s flow, used the rock ledge for lookouts, balanced on logs and leapt into imaginary lagoons. Varied environments afford varied types of play, play that is suggested by landmarks, inspired by great vantage points, incorporates interesting vegetation, hides in enclosures, and conquers open spaces with running.
Children are smart about play. Watching toddlers and tweens and in betweens scamper across the streamscape, it was apparent that they were alert to where to find rocks, handfuls of gravel, sticks, and leaves to float. An 18 month old toddler figured out in-no-time-at-all how to activate the water flow (and flood the sand pit) by tapping on a domed valve. Children’s observations, repetition, trial and error, and cooperation relocated dirt, flooded areas, and got things done.
Play connects children with children. Connections between children and across ages happen during play. Undoubtedly some of these children knew each other beforehand; some were siblings. But many moments I observed involved children meeting up and starting to play. Two boys started to create a dam in the same place in the stream; they started working together. A younger boy couldn’t move the pump handle and some tweens gave him a hand. Two toddlers rushed to the giant bucket and dragged it through the sand. Older children watched out for younger children.


Play inspires talk and stories (and literacy) One grandmother thrilled her grandchildren by challenging them to stand on a big fallen log so she could rock them off the log.  As she did so, she explained the finer points of log rolling. Her grandchildren begged her to repeat not only the description of logrolling but trying to roll them off. Stories and scenarios took shape along the stream and at the mud table. I overheard children saying “I know what this could be…”, “Let’s pretend we are lost,…” and “Have you found the magic stone?”
Children complete the landscape. A few woodsy edges remain in this newly created and recently planted play area. While planting the site had been going on over the last two months and intensified just before the opening, plants had barely taken hold. What had looked like a sparsely planted area before the gates opened became lush and full of life when children filled in and animated the landscape with movement, flashes of color, and a symphony of sounds.


Children are ready for play. They may not be getting as much open-ended and outdoor play as we would like for them. But from what I saw, children know just what to do in a loosely structured, material rich, wide open outdoor space.

An acre is not necessary. Neither is a completely wild place, nor is a comprehensively designed environment. But children do need ready access to a place and a time to play outdoors. And they need frequent opportunities to do so. It could be their own backyard or the neighbors’, behind the garage, under a tree, or in a big puddle.
With reluctance I passed on the tempting invitation to make mud with the friendly 4 year old but not before I introduced her to two 13 year-old girls who were enjoying the mud themselves. 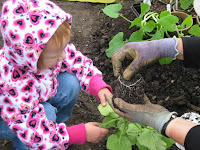