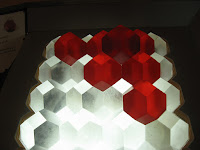 Geometry Playground lives up to its name as a playground for geometry.
During my visit, toddlers through tweens in school groups and family groups filled Geometry Playground. Children were all over and inside the climbing structures. Class and family groups clustered together to build a Sculpture That Moves, design at the Tile Designer, Geometron, and draw at Distorted Drawing. Pairs of students and adults worked at the stellated rhombic dodecahedrons. Small groups of adults as well as students and teachers strolled among the lighted cases of Geometry Garden.
The lay-out at SMM seems to suggest that finding enough space for a floor-plan that builds on geometry is a real challenge. At 5,500 square feet with 12-foot tall structures, Geometry Playground is a big exhibition. It requires both significant volume as well as a huge area; it won’t fit into just any space. The solution at SMM was to locate parts of the exhibition on two separate floors. The exhibition’s flow was interrupted and many visitors likely spent time on only one floor.
The exhibition is the major part of a bigger project that included two visitor research studies, the addition of some geometry structures on playground in San Francisco. The exhibition will travel to The Ruben H. Fleet Science Center (San Diego, CA) for summer 2011 to summer 2012.
For more information visit Geometry Playground
Posted by Jeanne Vergeront at 7:29 PM