“We don’t insure children doing surgery in shopping malls.” That was the unbelievable response I received in 1980 from an insurance agent to my inquiry about insuring a temporary exhibit for the very new Madison Children’s Museum. As a co-founder and designated exhibit maker, I was responsible for an interactive traveling exhibit about tools. Our hands-on tools exhibit, we thought, would invite children to use tools for beekeepers to use, tools for accessibility, and for doctors to use. It would help introduce the idea of hands-on exhibits by traveling to various settings, including a few shopping malls.
Fast-forward thirty years to 2010. A children’s museum is no longer a mystery. Now there are about 300 children’s museums in the US visited by 30 million children and adults annually. Getting insurance coverage for a traveling exhibit is not a problem either. 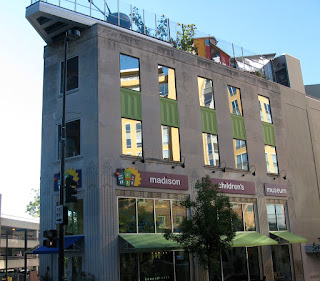 Meanwhile Madison Children’s Museum (MCM) has grown physically as well as grown into itself. In 2009 it served 90,000 visitors per year with an additional 30,000 through outreach. Most recently, the Museum has made a new home in a renovated 1929 Montgomery Ward department store just off the Capitol Square. Opening its doors in August 2010, MCM welcomed 13,000 visitors in the first week alone.
Clearly, MCM has grown significantly in the intervening 30 years. It has grown awareness and support with families, educators, and funders around central Wisconsin. As it has expanded from a traveling exhibit to three (and soon four) floors in its 56,000 square foot home, the Museum has also developed and evolved ideas it first presented at a smaller scale and that now distinguish it locally and nationally. In doing so, it has worked to reflect what its community values and what it hopes for children and their future.
There are several foundational messages and frameworks underlying Madison Children’s Museum new building and its exhibits, environments, and programs. Four threads that came through loud and clear are when I visited in September are: local, green, creative, and risk-taking.
The children I visited with couldn’t get enough of being in the driver seat of a polished wood car; building and rebuilding their city at the giant table map; playing in the Water Dome; and riding the goat and cart. Adults who have visited commented on the beauty of the exhibits and the fascinating and imaginative use of materials–everything from a gymnasium floor, to a Lake Michigan buoy, to cut sheets of tempered glass from the building’s interior spaces for the Water Dome. I found that the more I looked, the more I discovered what was re-used, surprising, or inventive. A Twister® mat served as a curtain in an office window. A mural painted by children’s book illustrator Kevin Henkes and his wife is just off the lobby. I saw collections and artwork from people I know and was able to find almost all of the wall quotes–from A to Z–starting with artist-created letters formed, not surprisingly, from re-used materials. And, as a one-time Madisonian, I especially enjoyed a history of Block 99 where MCM is located. 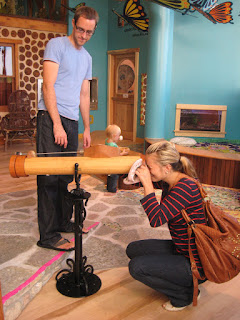 A mix of formal and impromptu museum planning was essential for the grand re-opening of MCM: architectural planning that integrated engineering for major exhibit elements, exhibit master planning with more than 100 community volunteers, and planning for the museum’s four-season green roof—a park in the sky. For museums that reflect their community and have a distinct identity, museum planning occurs continuously. Consolidating and building on their interests, improving offerings and experiences, and cultivating expertise and practices are needed to build organizational strength and contribute to the community’s vitality.
Posted by Jeanne Vergeront at 3:50 PM